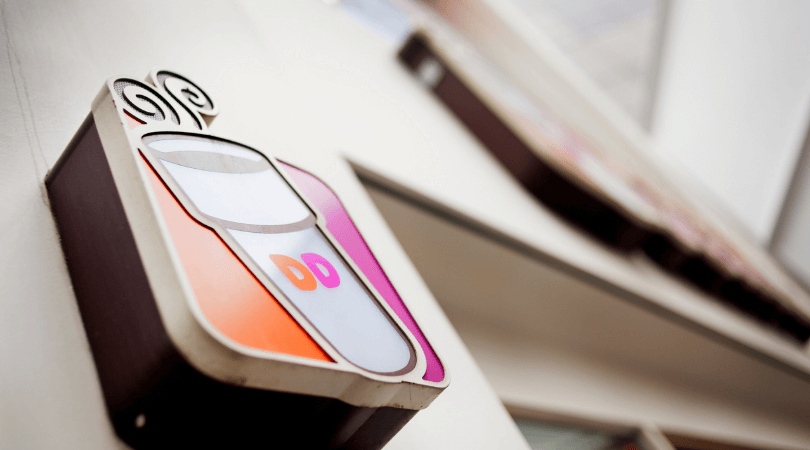 Did you know that Dunkin’ Donuts is one of the biggest coffee chains in the world? I couldn’t believe it! Where we are at, there are far more Starbucks, Peet’s and Dutch Bros than Dunkin’. In fact, when I started hearing about how great the coffee was at Dunkin’, I had to look up the closest location to me – because I’ve never driven by one!

Not only that, but I had no idea what coffee drinks to order. I’ve seen their ready-made coffee at the store and have tried some of them over the years (they’re good!), but I didn’t really think of them as a place I would drive through for a coffee. Then, I saw it: a commercial featuring several of their coffee drinks with innovative flavors and collaborations with foods I love, like Oreo and Chips Ahoy. Clearly, I needed to get myself to a Dunkin’ for some iced coffee: STAT.

What To Order at Dunkin’ Donuts:

The nearest location is a bit out of the way for me, but I’ve started making the trek to try out various coffee drinks. I’m working on a round-up of the best iced coffees at Dunkin’ and this requires lots of testing. It’s a hard job; but someone has to do it ;).

However, I keep wanting to reorder the same coffee over and over again. Sure, the new ones I order are usually pretty tasty (except for one – not good), but still, I keep thinking about – nay, dreaming about – that one iced coffee I had on my first trip.

So, while the round-up isn’t ready yet (but coming atcha soon), I thought I’d take a moment to sing the praises of the best iced coffee drinks I’ve found at Dunkin’. Are you ready for it?

After weeks of taste testing, I definitely think the best coffee at Dunkin’ Donuts is the Butter Pecan Swirl with cream.

I realize this could be controversial – I’ve seen more people fanatic about their DD order than possibly any coffeehouse, but I’m willing to stick my neck out there to help the masses.

Now, if you’re new to Dunkin’, like I was, know that they serve them black unless you ask for cream or milk. Adding cream means adding a light cream. I don’t really know what “light cream” is and I tried to get to the bottom of it to no avail (I’ll try to get answers and update this shortly). So, if you say “with cream”, know that it is not heavy whipping cream, as far as I know.

However, the cream is good. The cream adds a lovely creamy, velvety texture to the coffee and the butter pecan adds sweetness, almost like a caramel/vanilla blend, but with a slightly nutty aftertaste. I’m not a huge nut fan, personally, but I do like things with butter pecan, hazelnut and pistachio. If you don’t, then you may want to veer towards the caramel swirl with cream instead, which is my second choice pick so far.

What’s in a Butter Pecan Swirl?

Typically, the swirl is iced coffee and butter pecan syrup. If you want milk, to make it creamier, you can request to have it added. You can also add toppings, such as whip, drizzle and sprinkles.

I ordered a Butter Pecan Swirl with cream and it was very good. I would definitely drink it again.

Why go to Dunkin’ Donuts for coffee? 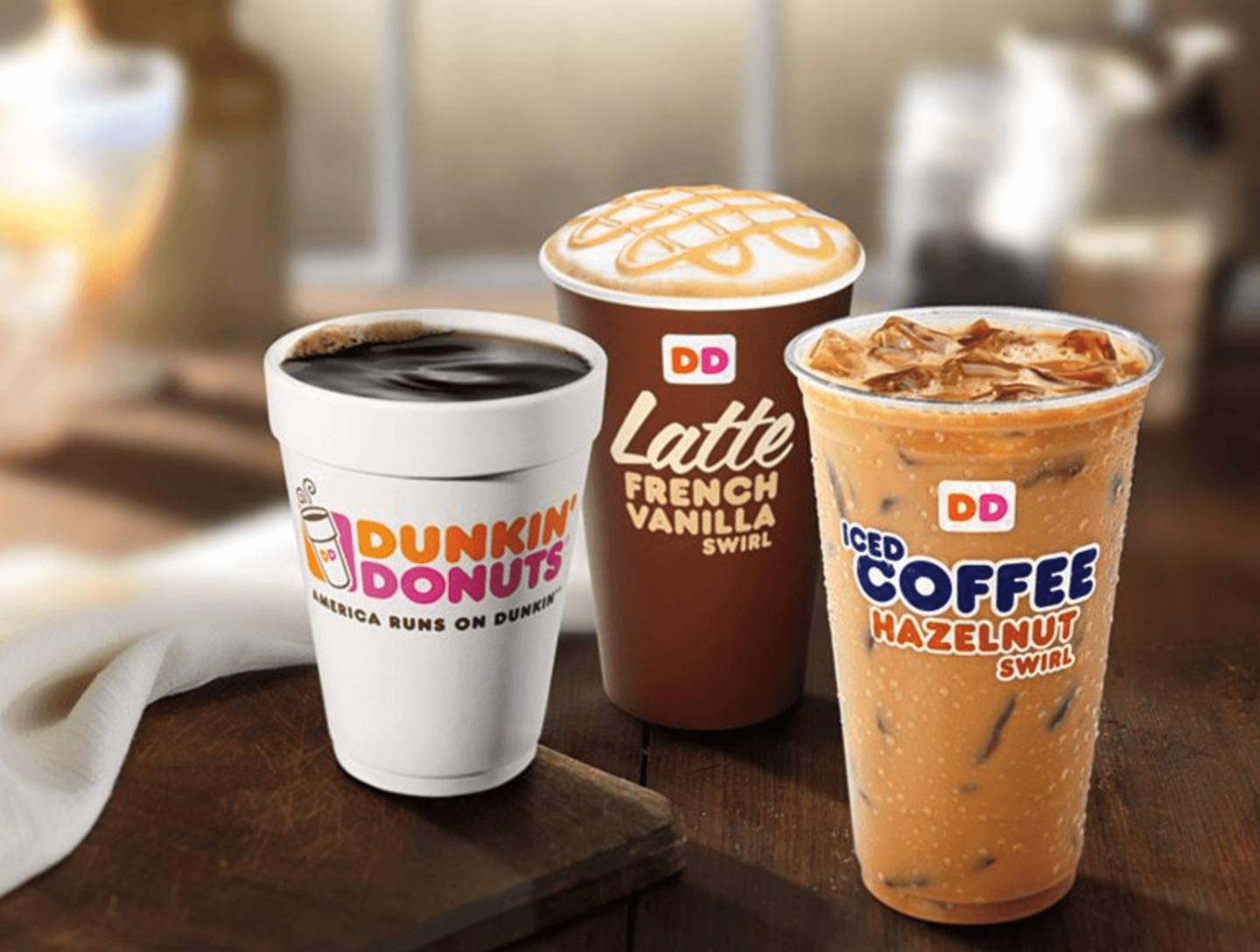 If you’re wondering why you should go to Dunkin’ instead of Starbucks or another coffeehouse, I think there are a couple of draws. For one thing, the coffee is more affordable. The small (which is about the size of a Starbucks grande) was $3.19 and that was with the butter pecan and cream. Plus, the line was very short – which could be where it was located or maybe that in my area they are not the common choice for coffee. Also, I was able to get a donut for each of my kids for much less than what I would spend for a snack from another coffee house. My average order with the kids at Starbucks or Dutch Bros is around $18-$20 (ouch!), but here, I could do it for under $10. That’s adds up quick!

The downside is that it’s not very convenient for me to go there. There are many places much closer. However, I have mapped it in relation to some other places we frequently visit and it’s not that far out of the way, so I plan to visit more often now, especially since my kids love it and they are usually with me, lol. 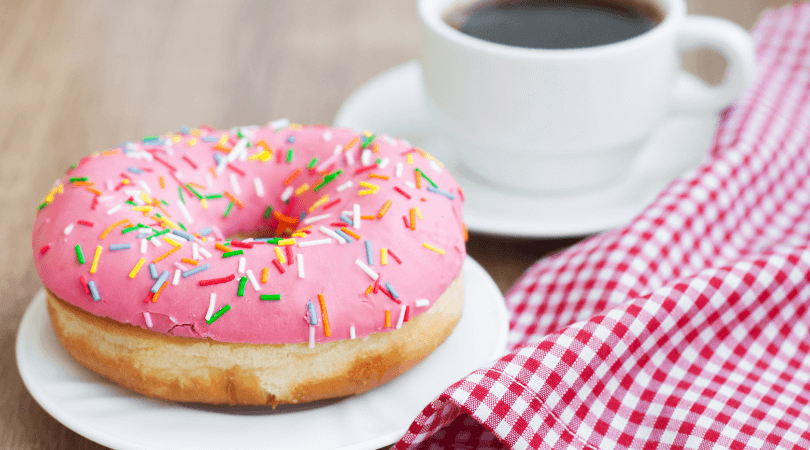 For a place so popular for their coffee, you would think the menu would be more thorough, but it’s not. The people working there are also not super helpful with drink ideas, so you need to know what you want when you go. If you’re used to a place like Dutch Bros, where the baristas are very well-versed on the menu and super excited to talk about drink ideas and customizations with you, then Dunkin’ is a bit jarring. It’s like a donut place that also offers coffee – but that coffee happens to be some of the bestselling coffee in the world.

Maybe this is only in my area – where they likely don’t get as many coffee orders like mine with so many other options around that specialize in coffee. However, if you find yourself near a Dunkin’ and need some cold brew, here are some options that you have for customizations:

What syrups does Dunkin’ Donuts have?

You have a lot of syrup options at DD, some of them not available anywhere else, such as the butter pecan swirl, which is amazing. There is also cake batter swirl (very sweet), caramel swirl (very good), french vanilla swirl (also good), and mocha swirl (yum).

You can also mix in their flavor shot options, which include: vanilla, hazelnut, toasted almond, blueberry, raspberry and coconut. These flavor shots are not sweetened, so you’ll need to add simple syrup (sugar) to your coffee if you want it sweetened. The toasted almond iced coffee with cream is quite good, even without sugar, and would be a great option for people trying to reduce sugar or go keto.

How many pumps of syrup are in Dunkin’ Donuts coffee?

I find the syrups to add quite a bit of sweetness, so I wouldn’t recommend adding more unless you really like it super sweet. The small gets two pumps of flavor, the medium gets three, and the large gets four. I find the syrup additions to be done very well for my taste, and I do like things sweeter and creamier. If you like more coffee flavor, I would actually cut the syrups in half.

What milk options does Dunkin’s Donuts have?

You have quite a few choices to fit your dietary preferences, including: coconut milk, oatmilk, whole milk, skim milk, almond milk, and cream. I have been getting cream in my DD coffees. I am a little dairy intolerant and it hasn’t been a problem for me. If you are dairy intolerant, you could easily swap it out for another option. Personally, I find oatmilk to be the best option for coffee drinks as it really enhances the flavors of the syrups and coffee.

What’s the difference between a flavor shot and a swirl?

Seeing some of the drinks with the “swirl” title got me wondering, what is a swirl? Also, how is that similar or different from a flavor shot? Turns out, the main difference is a flavor shot is unsweetened and sugar-free, while flavor swirls are sweetened and creamy. They both add calories to your drink, although the flavor shot is around 10 calories and the swirl is up to 150 calories.

What kind of coffee does Dunkin’ Donuts use?

They use 100 percent Arabica coffee beans and have their own coffee specifications, which are recognized by the industry as a superior grade of coffee. Based on Dunkin’ Quality (DDQ) specifications, coffee is milled and processed specifically for Dunkin’. They also source beans from Brazil, Colombia, El Salvador, Guatemala, Honduras, Mexico, Nicaragua and Peru are used. They also are committed to sourcing coffee responsibly and work with organizations like the Rainforest Alliance and World Coffee Research to ensure a long-term supply of coffee and benefit coffee farming communities.

****
I’ll be back soon with more info on my Dunkin’ taste test. Also, I’ve seen posts online that they also have a great collection of tumblers with color changing straws?!?!? Clearly, I need to actually go in to my location and see what they’ve got. I’ll report back soon.