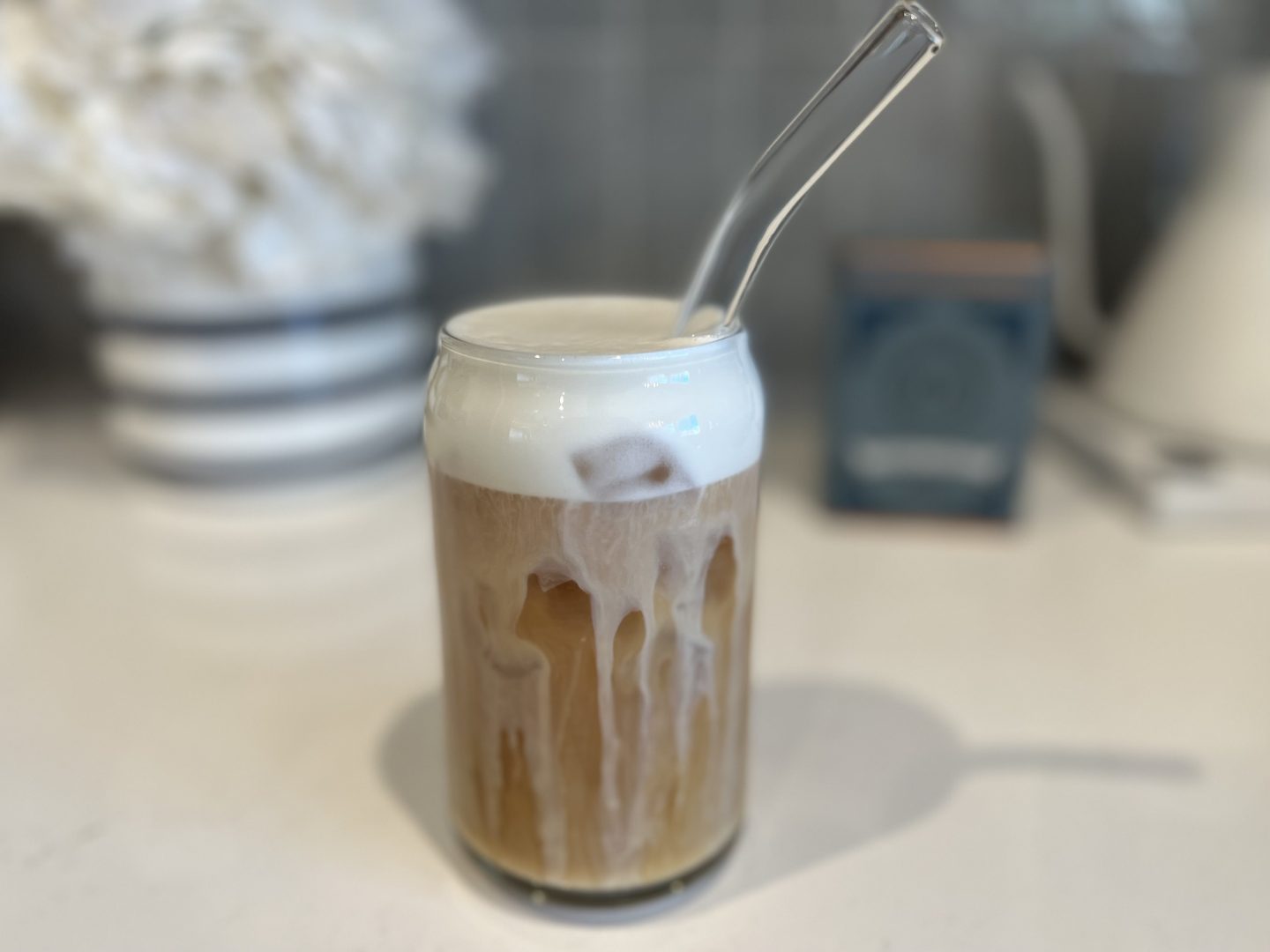 I recently shared a video of my new Iced London Fog Latte recipe on Instagram and y’all loved it as much as I do. If you’re a big fan of milk tea, tea lattes, or even just the Starbucks Iced London Fog drink, then you are going to love this.

Best part is that it’s super easy to make, only requires a few ingredients, and you don’t need any fancy equipment at all. You could even make do without the frother if you wanted to (but why would you? Why? Why?).

Tea lattes are some of my favorite drinks, especially after I’ve already had my coffee for the day and still want something delicious that has some caffeine. Whether it’s a chai latte, a matcha latte, or a London fog latte – I’m down with the tea and milk combo.

But, I know what you’re here for. I won’t keep you waiting. Let’s take a look at what you’ll need to make an Iced London Fog Latte. 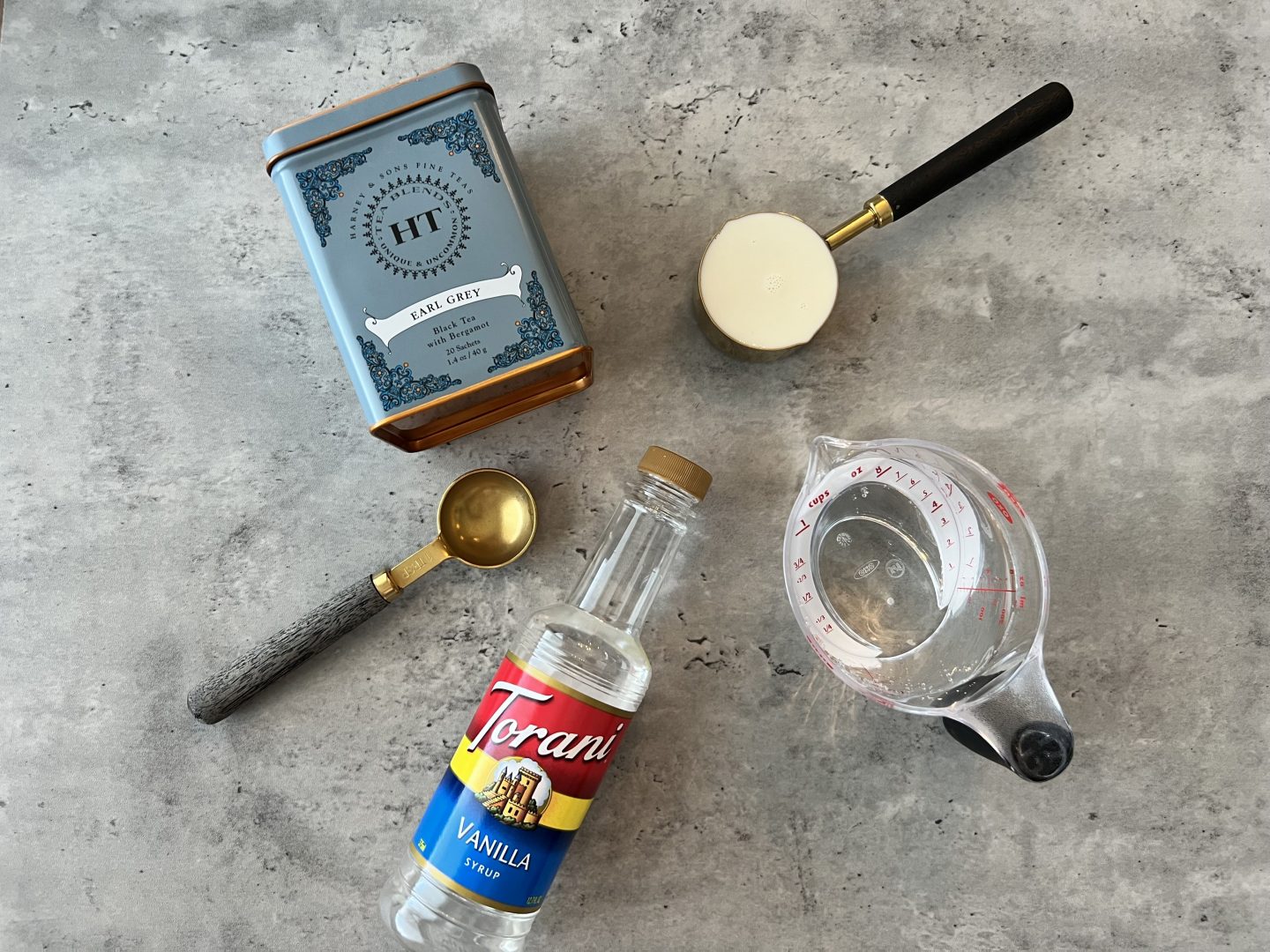 There’s really only a few ingredients in this sweet and creamy tea-based drink. You can customize a lot of it to your preference, especially when you’re making it at home. Here’s a little bit more about each ingredient and why you need it.

*Affiliate links are used here for products I use and bought with my own money. If you choose to make a purchase through my links, I may receive a commission at no cost to you. Win win!

How To Make a London Fog Latte:

This is so easy, friends. I made you a little video to walk you through it, but there are a few things the video doesn’t go into detail on that you need to know for this to turn out right, so let’s walk through it.

You want to start by steeping your tea for at least 3-4 minutes in 8oz. of hot water. Then, remove the tea bag and put the tea in the fridge or freezer for at least 10 minutes. This part is key. If you pour warm or hot tea over ice, you will melt the ice and have watered down tea and this will not be good. 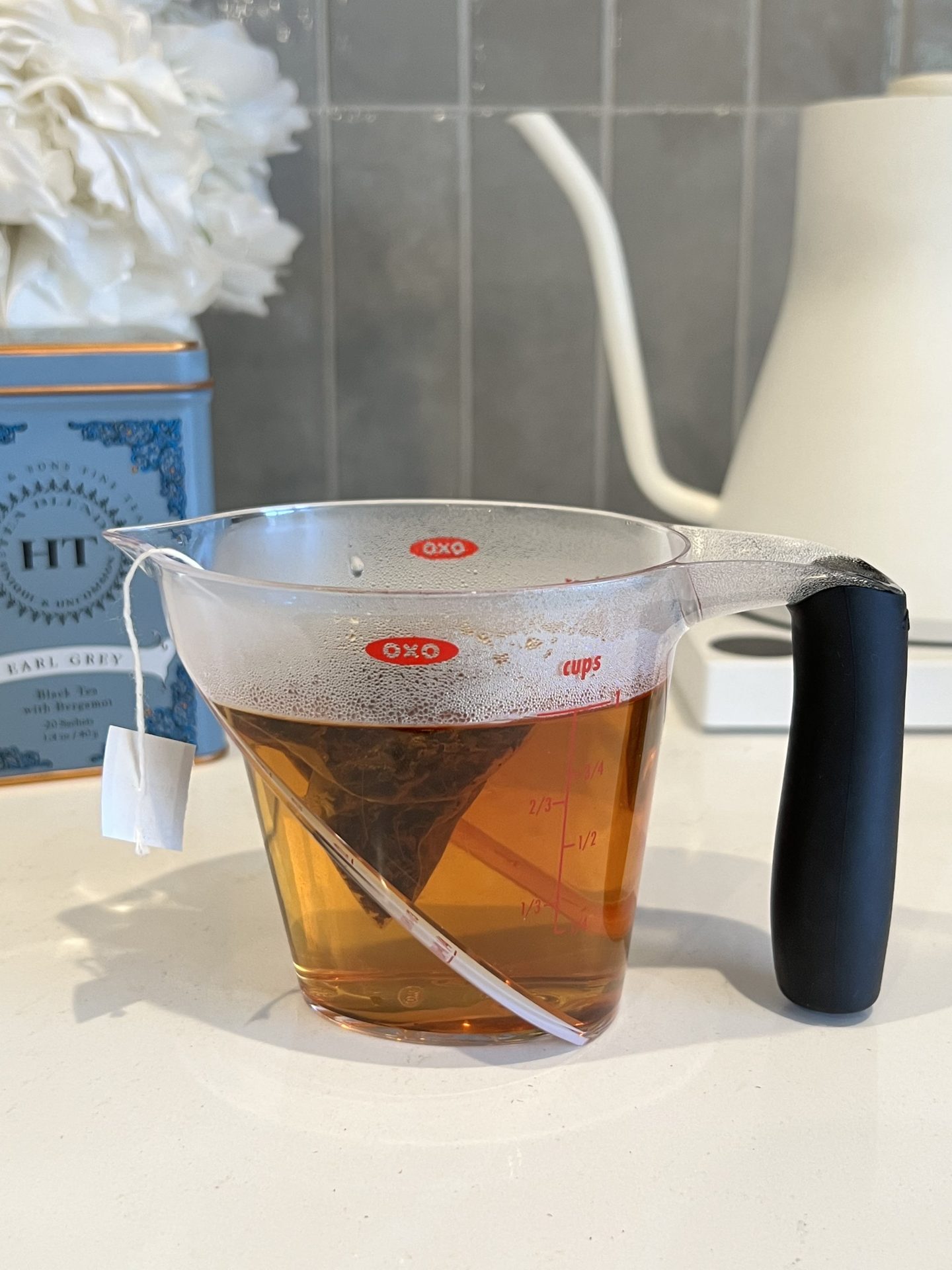 Then, once you’ve added your tea to a glass of ice, add your vanilla syrup to taste. One tablespoon makes it lightly sweet, very faint. Two tablespoons is noticeably sweet and vanilla. Three or more is going to be strongly flavored and sweetened. 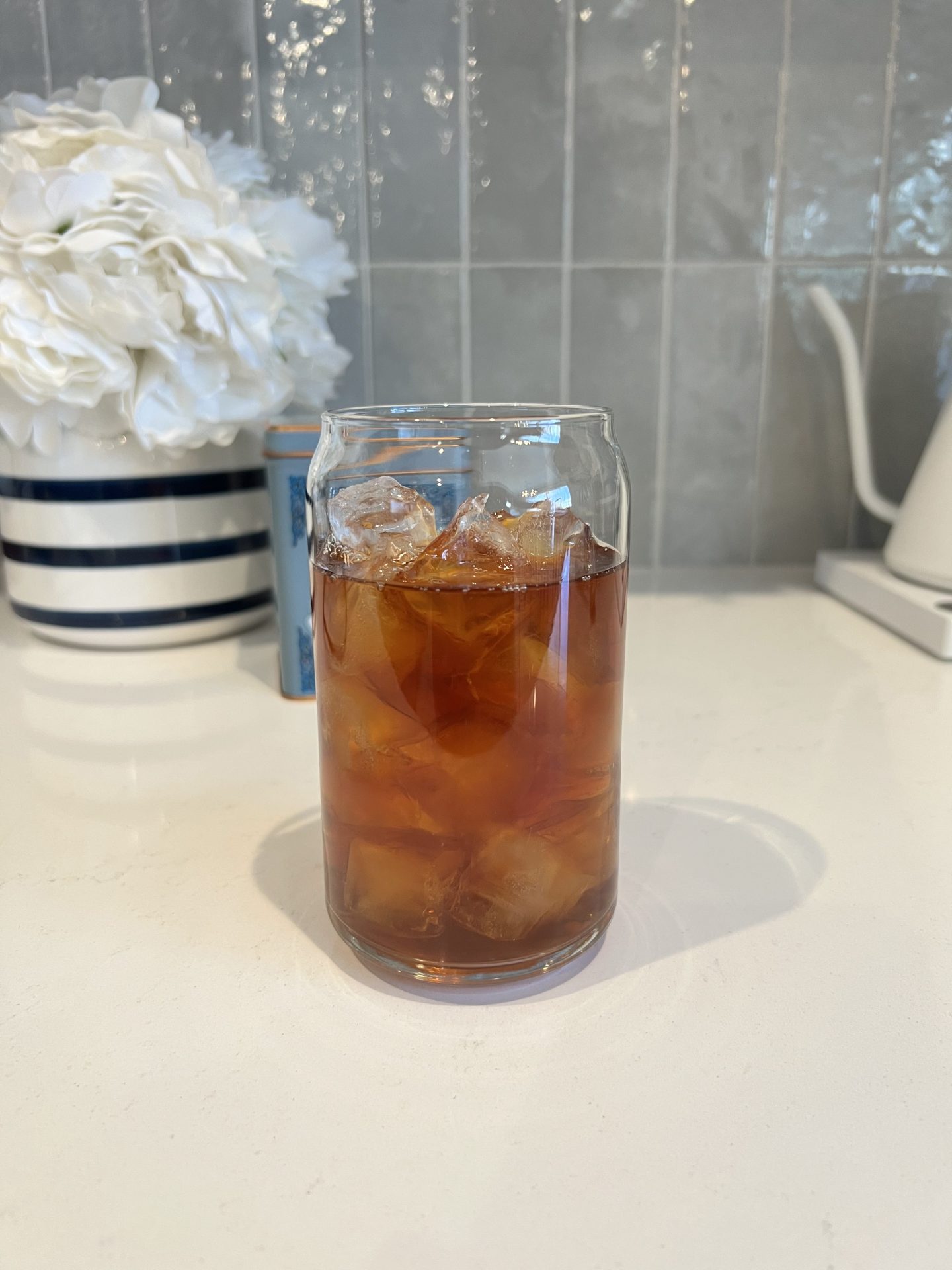 Then, add at least 1/4 cup of your milk to a frother with another tablespoon or two of vanilla syrup. Froth.

Pour your frothed milk over your tea and you are ready to go! 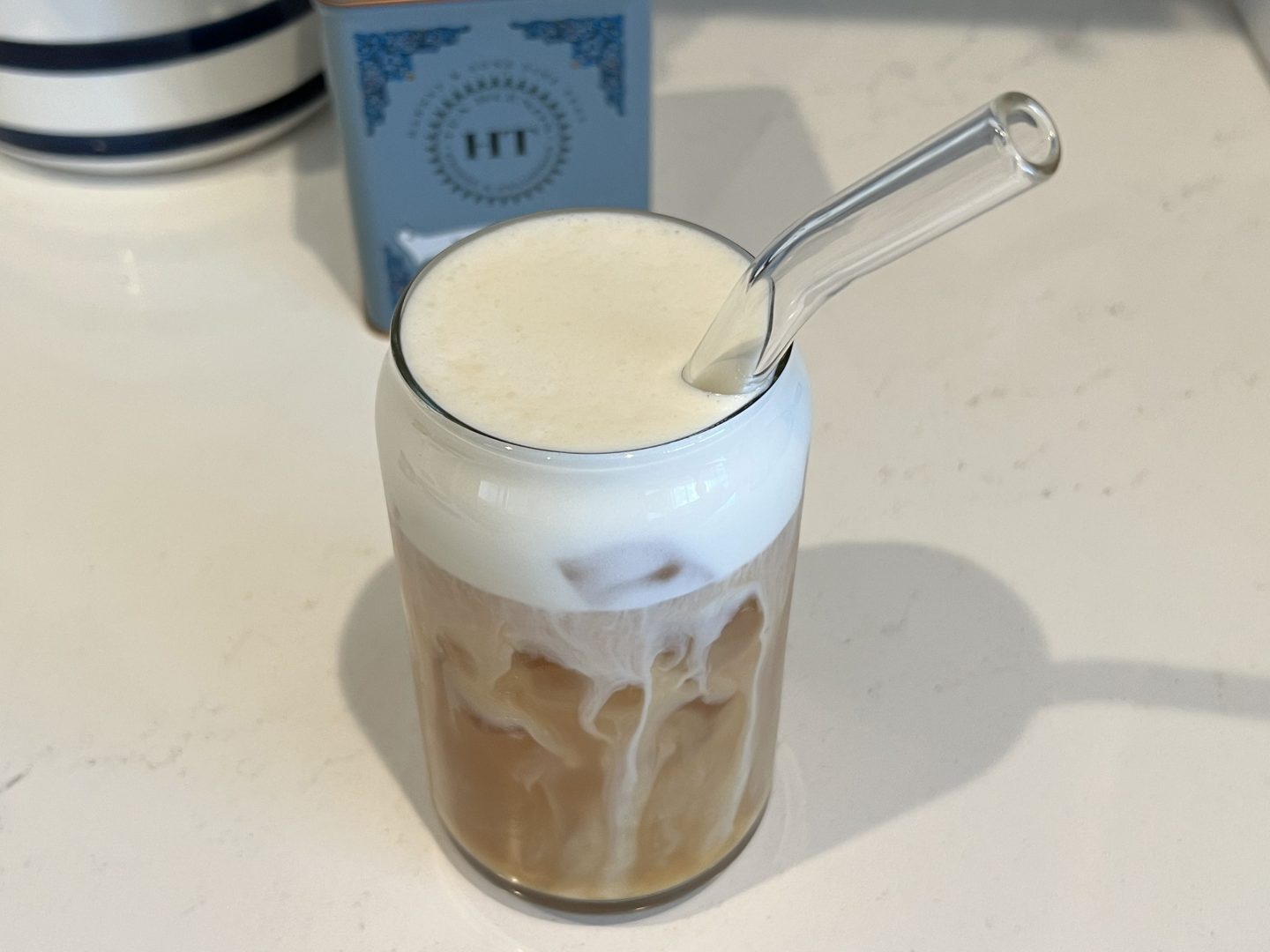 A note on sweetness:

I recently went to a milk tea place that was so cute and they had their own levels to their sweetness. They automatically serve it at 100 sweetness if you don’t choose a level and I would say their level of sweetness is probably a 3 tablespoon syrup in the drink and 2 in the foam. It’s sweet. Really sweet. But, delicious. If you are buying milk tea drinks at places like this and that is what you are used to – then you’ll want it more sweet.

If you are a person that prefers to taste the tea more and doesn’t want to have a lot of sugar, I would start with one tablespoon in the drink and one in the milk. You can always add more to the drink!

You’ve got questions – and I’ve got answers!

Does an Iced London Fog Latte have caffeine?

Yes, the London Fog tea latte is caffeinated (otherwise, we probably wouldn’t write about it!). You’ll get a gentle kick from 40mg of caffeine in a grande. One cup of plain coffee offers you 95mg of caffeine, so you’re looking at a little less than half of that in a fog.

In comparison, an 8oz. cup of green tea has 40-60mg of caffeine, so it’ll be similar to the slight buzz you’ll receive from a cup of green tea, with a more soothing flavor.

How Does a London Fog Compare To a Chai Tea Latte?

The main difference between the two tea lattes is the use of the warming spices in the chai. Chai has a very specific, unique flavor, thanks to the combination of spices like cinnamon, cloves, cardamom and more. You can even add coffee for what is called a dirty chai (read the dirty chai taste test here).

The London Fog has a much softer taste, using soothing notes of vanilla, earl grey tea, milk or milk substitute, for a tea latte similar to a milk tea.

Because of these softer flavors, the London Fog is often infused with additional flavors like lavender or honey, which are also delightful.

What Does an Iced London Fog Latte taste like?

The London Fog tea latte has a soft, soothing flavor with a creamy texture. The combo of Earl Grey tea, with notes of lavender and bergamot, with vanilla syrup and the creaminess of the milk is a match made in heaven. If you are a fan of vanilla based drinks, you will love the London Fog latte. Hot or iced, they are both delicious.

What goes in a Starbucks London Fog Latte?

What are the Nutritional Facts for a London Fog Tea Latte? 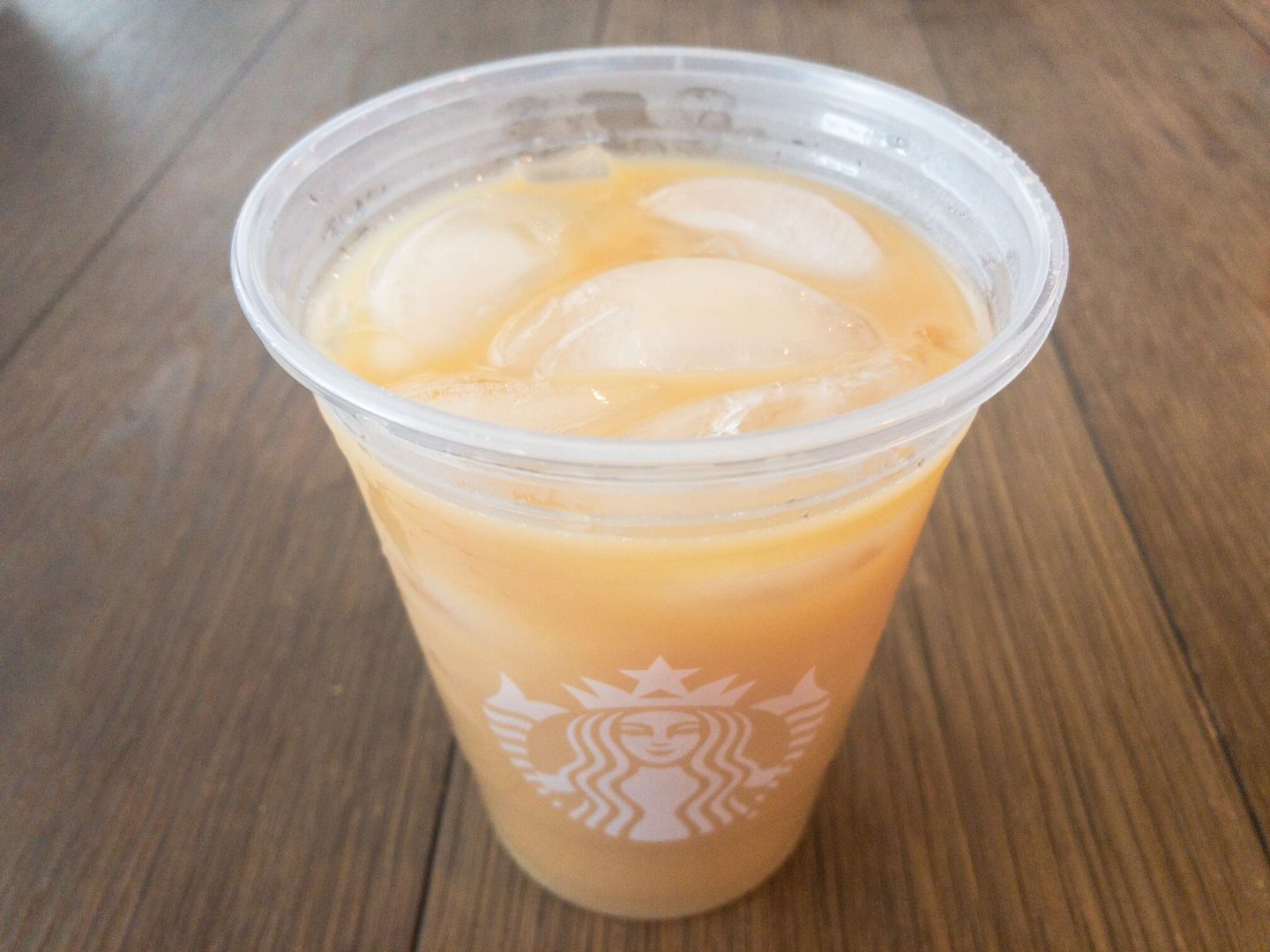 Since I make mine similar to how Starbucks does, we can use their nutritional facts. These are the numbers based on the grande (473ml) sized drink.

Is a London Fog Latte sweet?

Yes, it can be! This depends on how much vanilla syrup you decide to put in it. Less syrup will equal a less sweet latte with more tea flavor and more milk and syrup will give you a sweet and creamy delicious treat of a drink.

Can I make a keto London Fog Latte?

You sure can! Just use sugar-free vanilla simple syrup and heavy whipping cream for the milk and you are in business! This will reduce the sugar and carbs in your latte.

Is a London Fog Latte healthy?

This depends on what you’re comparing it too and how much syrup you put in it. If you’re comparing this to most coffee drinks that are full of syrups, milk and drizzle, then yes, a London Fog Latte has a lot less calories, fat, carbs and sugars. If you reduce the amount of syrup that you put in, you could easily make this drink for under 100 calories and very low carbs and sugar. However, if you are adding 3 tablespoons or more of vanilla syrup to the drink, you may find that the calories are going to be similar to your favorite iced coffee drink.

I love recreating my favorite coffeehouse drinks at home. Here are some more copycat recipes – and other favorite drink recipes on the blog you might like:

*****
I hope this inspires you to grab your black tea and make an iced London fog latte.