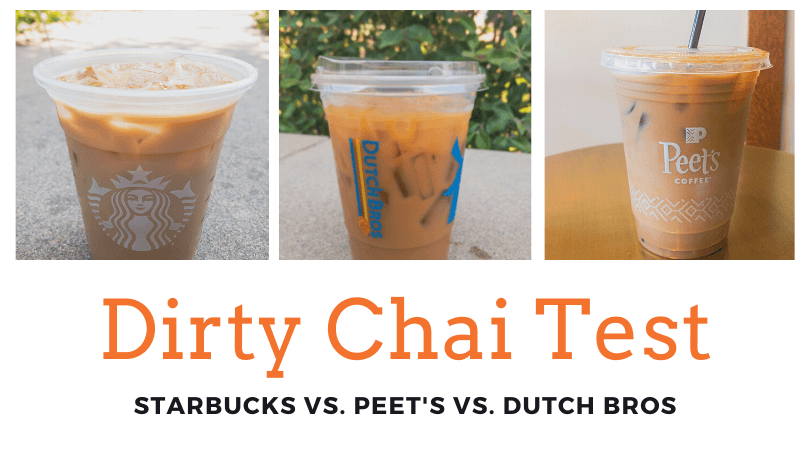 I’ve been drinking a lot of dirty chais lately. While I am a big fan of a chai tea latte, particularly iced, and usually in the afternoons when I’ve already had quite a bit of coffee that day, I have not been a consistent dirty chai drinker.

So, I decided to put my favorite coffeehouses head-to-head with a dirty chai test to settle it once and for all, who makes it best? In my area, the big three are Starbucks, Peet’s Coffee and Dutch Bros. That’s where I started (but who knows, maybe there are even more dirty chais in my future).

To test them fairly, I ordered them all the same way, small, iced, with oatmilk, and one shot of espresso.

Other than that, I let them do their thang and make it how they make it. I will say that prior to this test, Starbucks was my favorite chai tea latte. I really love their blend of spices that is more cinnamon and less kick. I’m big on cinnamon. Not so big on spicy.

But, before I dive in to the breakdown for each one, I’ll cover some basics on the dirty chai for those of you that are new to it. If you know, scroll down to read how each one of these drinks was actually quite distinct (surprisingly so) and which one I would sip again vs. the one that I wouldn’t.

WHAT IS A DIRTY CHAI? 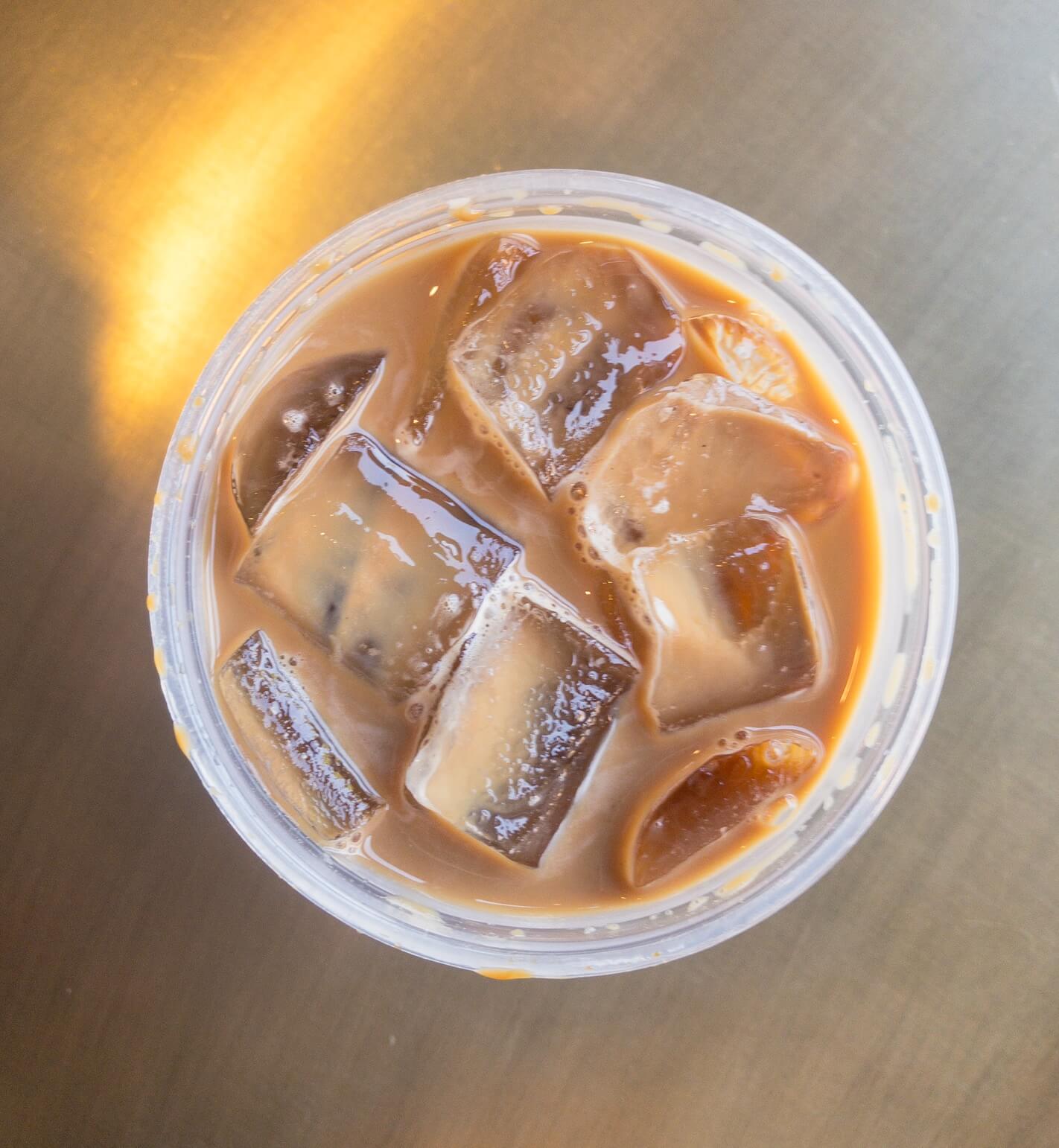 If you’re wondering what a dirty chai is, we’ve got you covered. It’s got the body of a chai tea latte – which means a combination of delicious spices, like cardamom, cinnamon, cloves, ginger, and black pepper.

I find the Starbucks chai tea latte to be a really smooth, cinnamony flavor, while the Peet’s chai is a bit more of a kick in the pants and spicy. Dutch Bros reportedly uses the Oregon Chai brand of chai tea latte mix in their chai tea drinks. So, every version of it is going to be unique.

HOW MUCH CAFFEINE IS IN A DIRTY CHAI?

A typical chai tea latte has around 4 oz of black tea, which contains 40mg of caffeine. The same amount of coffee has triple the amount – with approx. 120mg. of caffeine. A shot of espresso has 64mg of caffeine – making your typical dirty chai ring in at around 100mg of caffeine. It’s a nice little middle ground between tea and coffee, in our opinion.

Of course, you can control the caffeine content based on the size and number of espresso shots that you order. Starbucks specifically asked me how many shots of espresso I wanted in mine – and I opted for just one, because it was my second coffee of the day. 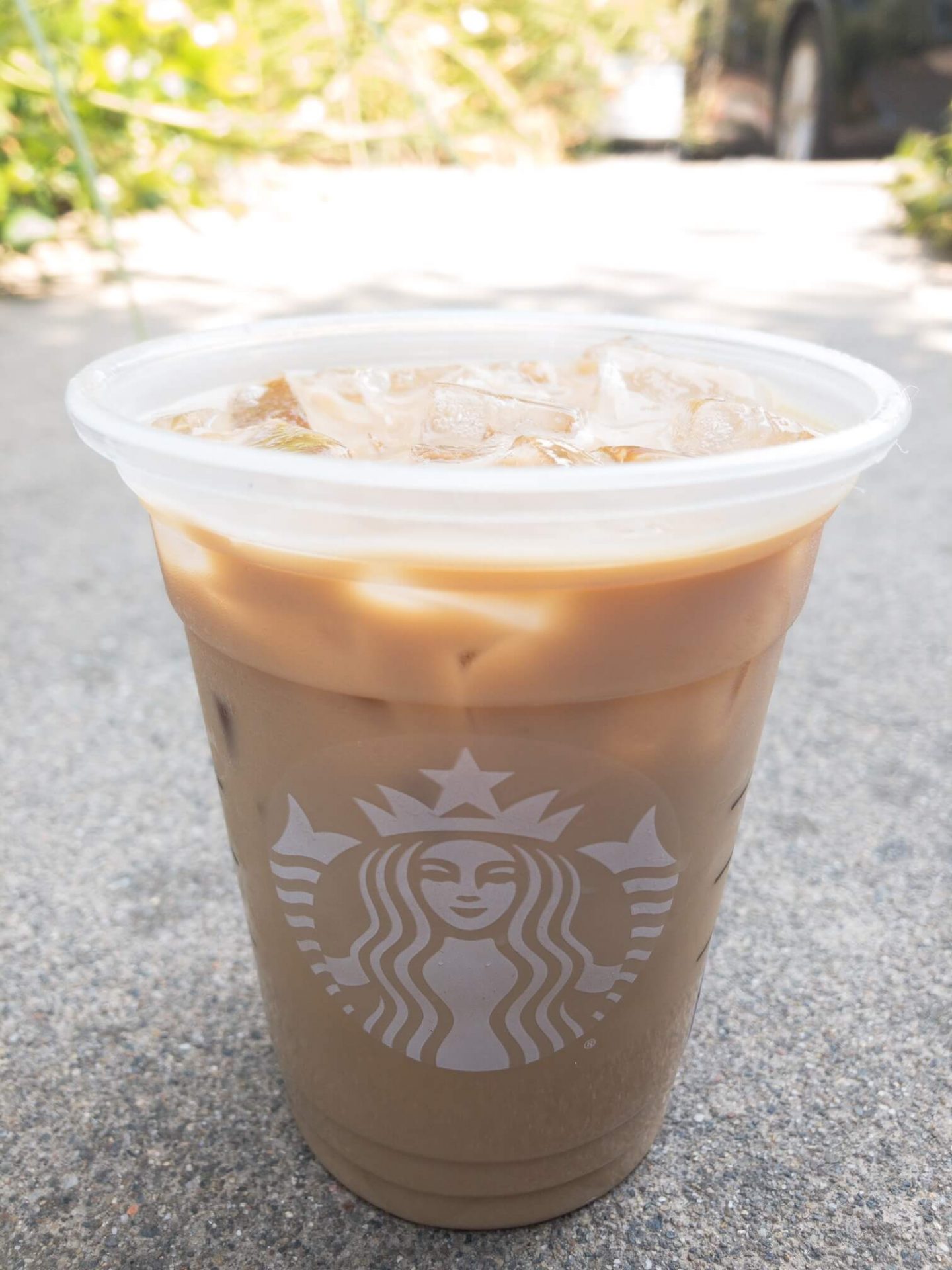 I was expecting to be my favorite, since I prefer their chai tea blend. The combo with oatmilk is really just next level, too, so if you haven’t tried that yet, please do and come back to tell me what you thought about it.

And, their dirty chai certainly wasn’t bad. In fact, I could still taste the chai spices coming through and the combo wasn’t too watered down by the espresso. Their typical chai tea latte is usually a thicker consistency than a regular vanilla latte, but the addition of the shot of espresso gave it a very latte like consistency.

Overall, I felt the coffee and chai flavors were well balanced. This, to me, was the one I would order most often.

However, another reviewer who tested these with me referred to it as “swamp water”, because they couldn’t taste one over the other. So, if you are a dirty chai drinker that wants to taste the coffee more or the chai spices more, keep reading – because there is a dirty chai for you on this list.

Also, if you love Starbucks chai tea lattes or dirty chais, make them at home with the same chai concentrate. Starbucks uses an ultra concentrated version of this Tazo Chai Concentrate. When you use this concentrate at home, mix it with milk or a milk substitute at a ratio of 1/2 cup to 1/2 cup or 1:1. (Starbucks also adds water to dilute it, but you won’t have to with the store bought version.) 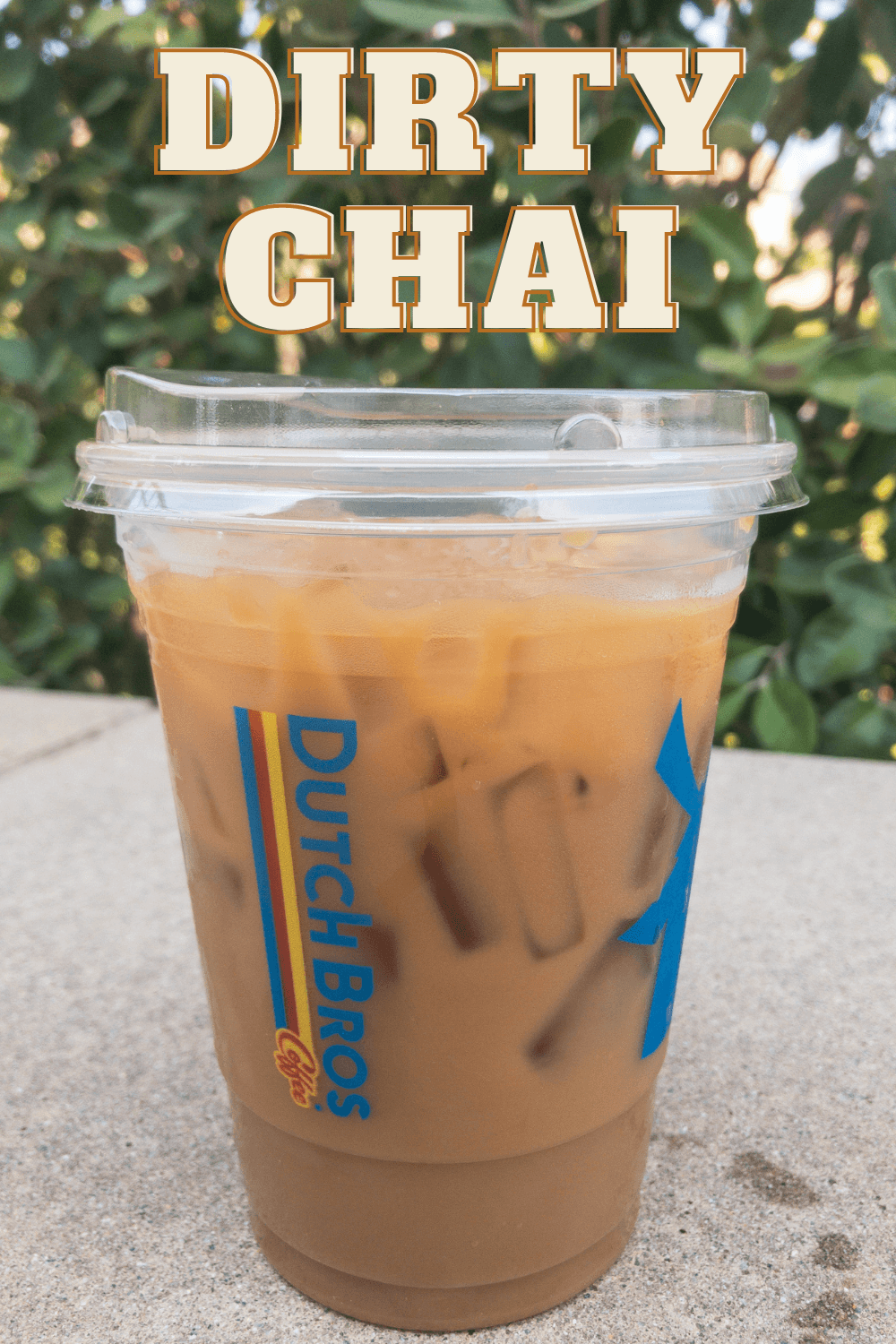 Of all three, the Dutch Bros dirty chai has the strongest coffee flavor. You can really taste that coffee over the chai. It also felt like the strongest caffeine boost. I did order only one shot, but did think a few times if maybe they added two. It absolutely gave the dirty chai the most watery consistency of the three I tried.

Personally, this was my least favorite and here is why: I am a huge fan of many of the Dutch Bros iced coffee drinks and drive out of my way and wait in long lines to get them pretty frequently. These are their signature drinks that I can’t get anywhere else.

For me, if I’m going to go for that treat – I want something uniquely DB – and to me – the dirty chai was not that drink. Make sure to read some of my other posts on the best drinks at Dutch Bros.

However, I wasn’t the only one tasting these drinks and another tester said this was their favorite. Why? Because it was like a latte – but kicked up a notch in flavor. So, there you go.

If you love the DB chai lattes or dirty chais, you can recreate them at home using the same chai concentrate that they use. Dutch Bros reportedly uses this chai concentrate as the base for their chai drinks. 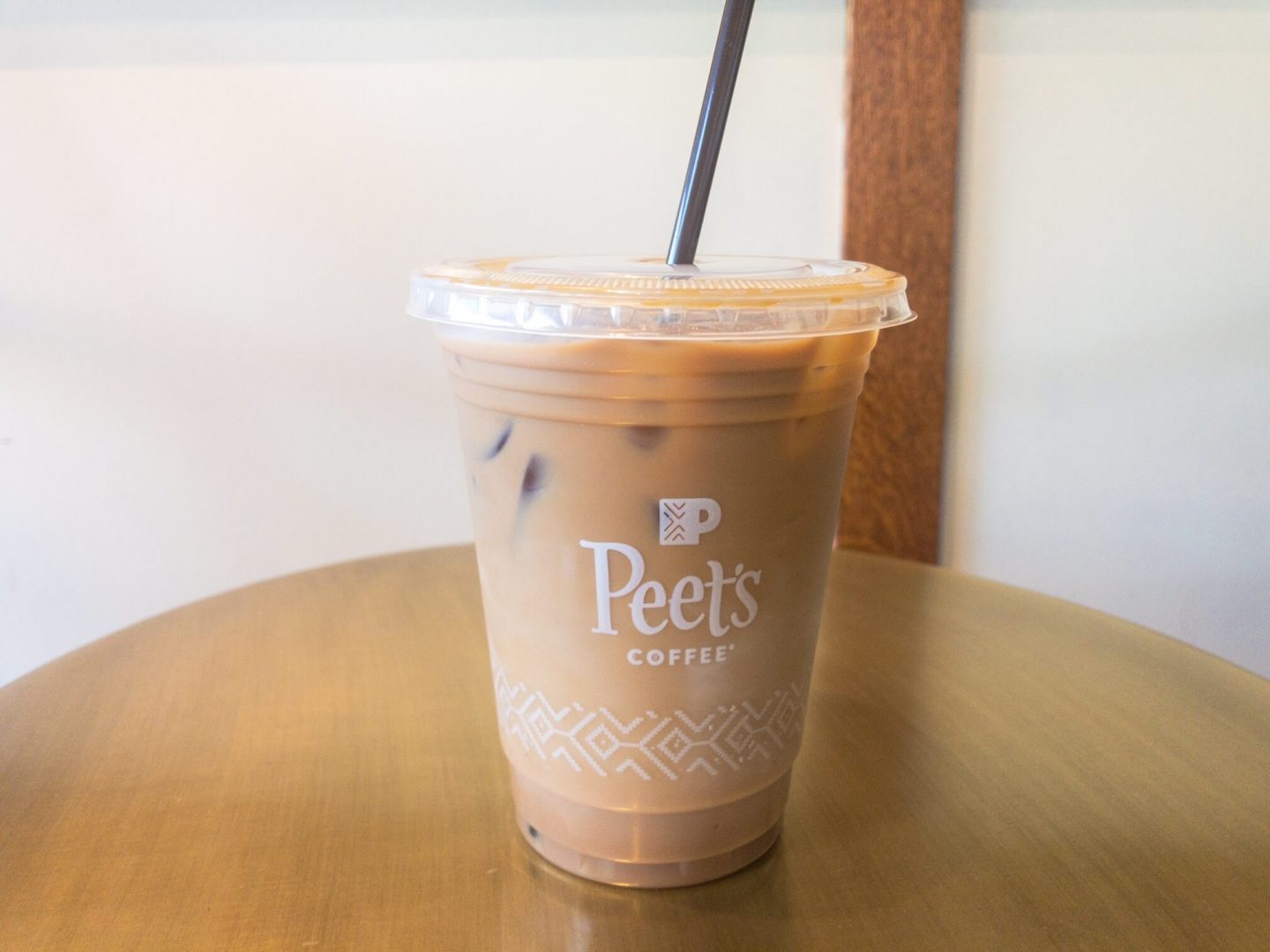 Peet’s is known for a kicky chai. They have the spiciest chai I’ve tasted yet, which is why I don’t get chai at Peet’s, lol. They do, however, have a killer horchata oatmilk latte and many other fab drinks – so I saved my chai for Starbucks.

But, in the interest of being thorough – I did not want to forgo the Peet’s dirty chai.

And, let me tell you, the Peet’s dirty chai surprised me the most. It had the most chai flavor of them all and the coffee actually muted some of the spice!

I thought the dirty chai was BETTER than their normal chai! I would absolutely buy this one again and that is saying a lot, considering I never would buy their chai tea latte before.

So, go for this one if you want to actually taste your chai.

I love doing these taste tests and the blog gives me an excuse to buy all the coffees and try them. I hope they help you find the perfect drink for YOU.

If you want to read more of these, check out the oatmilk latte taste test for some more fun ideas of drinks to try.