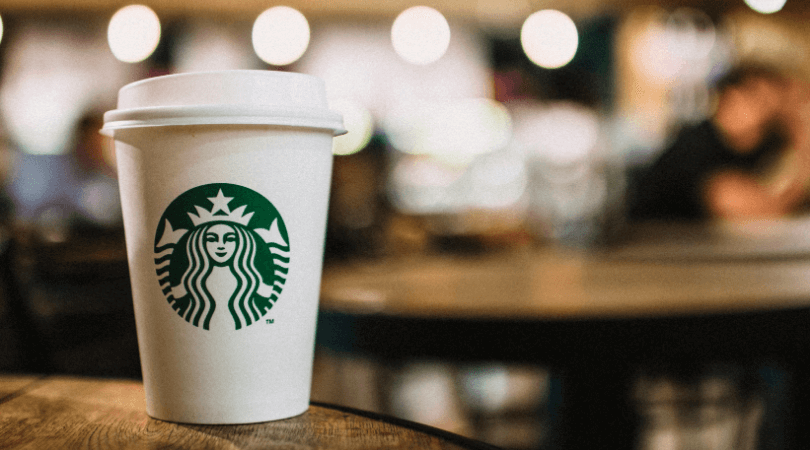 It’s no secret that we’re big fans of Starbucks. In fact, it was the first coffee shop either of us ever went to many years ago and it obviously had a big impact on our lives – since we now blog about our obsession with coffee.

Where we live, in California, there is a Starbucks pretty much anywhere you could want one – and we support that. We believe access to coffee makes the world a better place and Starbucks has perfected the art of consistency. You can get the same drink, made pretty  much the same way, at any Starbucks location. I’ve even been to a Starbucks in France and Italy and been amazed at how similar the shops and the drinks are.

So, today, in honor of how Starbucks has changed the coffee industry – we are going to share some of our favorite facts about the history of Starbucks.

1. How Did Starbucks Get Started?

Starbucks opened its doors in Pike Place market in 1971 by three founders: Jerry Baldwin, Gordon Bowker, and Zev Siegl. Originally, the store sold coffee, tea and spice. They were inspired by the success of the first Peet’s Coffee and Tea, which opened in 1966 in Berkeley. It was Peet’s success that encouraged the Starbucks founders to base their business model on selling high-quality coffee beans and equipment, and Peet’s became the initial supplier of green coffee beans to Starbucks. The partners then purchased a used roaster from Holland, and Baldwin and Bowker experimented with Alfred Peet’s roasting techniques to create their own blends and flavours (source).

By the 1980s, Starbucks had 4 locations around Seattle. Siegl left the trio in 1980, and then in 1981,  Howard Shultz – a sales rep for the company that Starbucks bought their machines from – was hired as director of marketing in 1982. In 1983, Schultz was inspired by a trip to Milan and when he came back, he wanted to bring the Italian espresso bar concept to Seattle. The other owners were not interested in this idea, so Schultz left and started il Gornale, which was an instant success.

In March 1987, the other owners decided to sell Starbucks and Schultz was able to buy it using his profits from il Gornale and investor backing. He combined his businesses and in 4 years was able to grow to over 100 locations.

2. Where did Starbucks get their name?

With the store opening in the market by Seattle’s waterfront, nautical names were top of mind when naming the company. The name Starbucks was inspired by the seafaring novel, Moby-Dick. Starbuck is the first mate in Moby-Dick. The name of the ship, Pequod, was almost chosen, but ultimately Starbucks won and the rest is history.

3. Where was the first Starbucks location?

You can still visit the very first Starbucks at 1912 Pike Place in Seattle, but with only 1,000 square feet and no room for tables and chairs, you may want to get there early. The line usually stretches out the door at this popular location. But, you’ll get to see the original logo, bulk coffee bins and the extra tall espresso bar.

I’ve actually been able to visit this iconic location, as well as some other gorgeous locations in Seattle. If you’re a Starbucks enthusiast, they are a fun stop on your Seattle tour.

4. How many Starbucks locations are there now?

Currently, Starbucks is the largest coffee company in the world with around 32,000 locations across the globe. Starbucks year over year growth has almost doubled in the last decade.

The US is the country with the most Starbucks, with California leading the way with almost 3,000 locations, followed by Texas and then Florida. New York City is the city with the most locations – 241 in April of 2019.

The state with the fewest locations? Vermont, which boasts only 8 locations (so I definitely won’t be moving there…).

5. What is the meaning of the Starbucks logo? 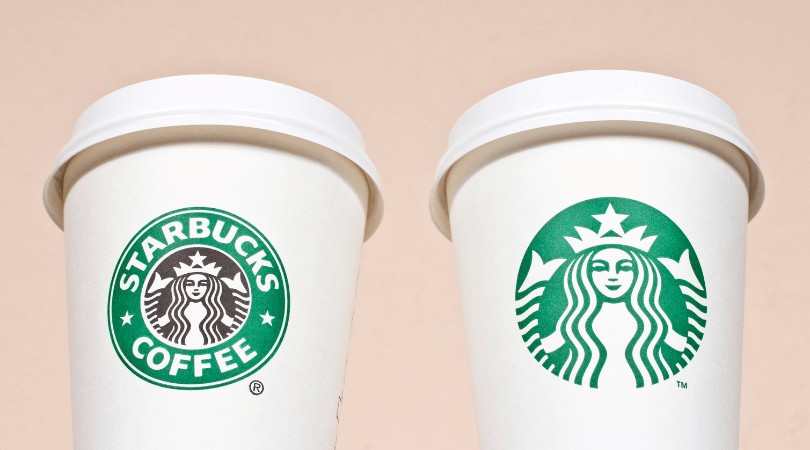 The Starbucks logo has gone through many redesigns over the years, from zooming in on the siren’s face to transitioning from the original brown to the now-iconic Starbucks green.

The use of the siren in the logo is a nod to Greek mythology. In Greek lore, the siren has the head of a human and the body of a mermaid. They sang a song so sweet, the sailors would jump from the ships and try to swim to them – ultimately drowning. Therefore, the siren represents temptation and desire.

Starbucks used the siren to depict the seductive nature of the sea – since the first Starbucks was opened on the waters of Seattle, but of course, there is a double meaning that their customers will be lured by the addicting quality of Starbucks coffee and need to return again and again.

The original siren was a bit more bawdy. Over the years, she has been given a facelift and a more tasteful design, while being changed from brown to green.

6. What do the Starbucks cups sizes mean?

Since the beginning of their espresso drinks was inspired by Schultz’ trip to Milan, he decided to use Italian words to represent the various sizes. Each size – tall, grande, venti, etc., represents a size in ounces.

For the full breakdown of what each size means, how many espresso shots are in them and much more, check out our full post on Starbucks cup sizes.

7. How many drinks does Starbucks offer?

According to Blue Water Credit, Starbucks offers 87,000 drink possibilities to customers! Considering all of the customization options, this is still a huge number. You would have to drink 238 cups a day to try them all in a year.

8. How many people visit a Starbucks every day? 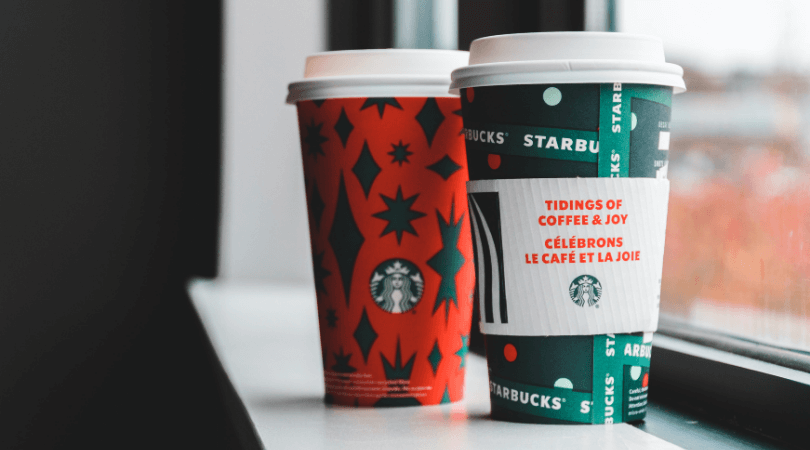 Pre-pandemic numbers show that an estimated 37.8 million Americans visit Starbucks every day. In comparison, 38 million is the population of the entire country of Poland. Wow!

The pandemic did effect growth for many companies including Starbucks. According to QSR, Starbucks lost about $915 million from the pandemic and 25% of store sales.

9. Which Starbucks blend was released first?

The House Blend was released in 1971. Though it’s named for the flagship store, the Pike Place Roast wasn’t launched until 2008. Starbucks Siren’s Blend, one of the most recent blends, celebrates trailblazing women of the coffee industry.

10. What is the Starbucks Espresso Roast?

Starbucks Espresso Roast was created in 1975 by Dave Olsen. His obsession with the perfect roast paid off – more than 45 years later, the signature Espresso Roast is at the heart of millions of handcrafted espresso beverages every day.

11. When was the frappuccino introduced? 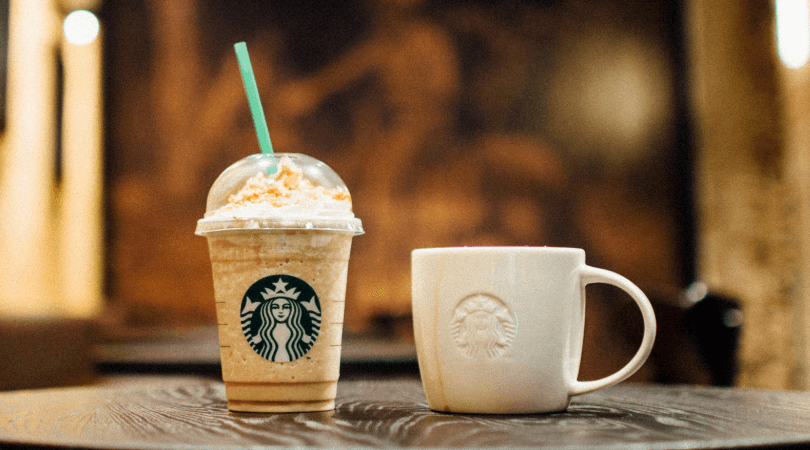 Was the frappuccino the first drink that you tried? For many people we talk to, this was the gateway drink to a long love affair with Starbucks (mocha frappuccino for me!). The frappuccino is a blended coffee beverage that turns your caffeine fix into a frothy, creamy, delicious summer beverage. Topped with their infamous “whip” – it’s the perfect coffee for a hot day.

The frappuccino made its grand entry in 1995. A year after it was added to the menu, they began selling bottled versions of them in stores. 1998, these bottled drinks became available in grocery stores. Yum.

12. How much coffee does Starbucks grind each day?

A lot. When they can, they pack up coffee grounds in used espresso bean bags and give them away for free. Look for the grounds for your garden at your local Starbucks store.

Coffee grounds can be used for gardening, cleaning kitchenware, repelling pests and much more.

13. How much money does Starbucks make each day?

According to Marketwatch, Starbucks brings in around $22.39 billion in annual sales. If this is divided equally across the year evenly, Starbucks banks about $61.3 million every day (source).

14. How many people does Starbucks employ? 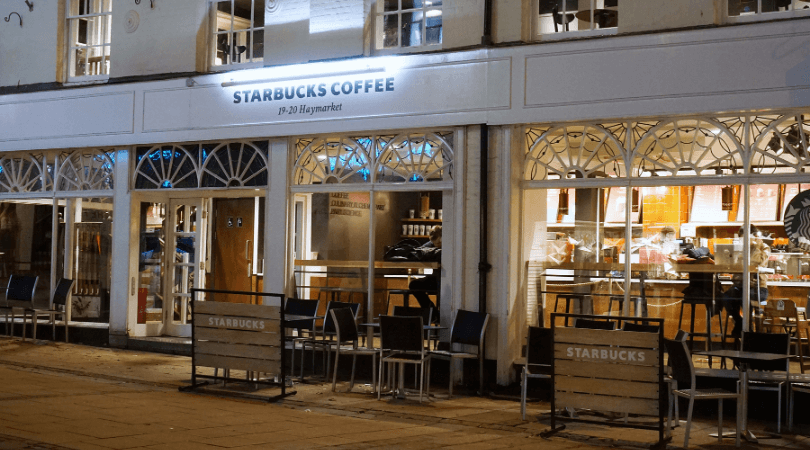 15. What is Starbucks Bean Stock?

In 1991, Starbucks began offering a stock-option program called Bean Stock to their employees, so that they could become partners int eh company’s success.

Is your coffee habit getting expensive? You’re not alone – the average person 25- to 34-year-old reportedly spends $2,008 per year at coffee shops, like Starbucks. So, if you’re looking for ways to cut back on your spending (but not your coffee habit), check out our post with 10 ways to get free Starbucks. We use a lot of these every day and definitely recommend them.

17. Does Starbucks have an app?

Yes! The Starbucks app was first released in 2009 and has gone through several new releases and updates since then. Now, over 20% of all orders are made through the mobile app!

Through the app, you are able to earn stars that you can use towards free coffee, food and merch, as well as order ahead so you don’t have to wait in line. You can even send someone a Starbucks gift card right from your phone.

The app is free to download and use and you can earn free coffee and play their games for extra stars. Check out our full review of the Starbucks app here.

18. How many Starbucks have a drive thru?

Do you love getting your coffee on the go? Coffee chains like Dutch Bros have gone for the drive thru consumer 100%, but for Starbucks, they are still investing in the coffeehouse experience. Currently, 35% of Starbucks locations have a drive thru – but they are actively looking to increase that number to 45%.

Just yesterday I was sitting inside a Starbucks that just did a redesign. It has a beautiful and comfortable sitting area that is prime for getting some work done. There were just three of us in the entire area, but I watched the drive thru stay busy the entire time, often 5-10 cars in line at a time. So, if you’re looking for a quiet place to work – find the Starbucks near you with  drive thru. You’re welcome.

19. What is the most popular drink at Starbucks?

Wouldn’t we all love to know! However, with the popularity of seasonal, short-term menu items like the fall drinks (hello PSL), it’s hard to know exactly.

However, here is a list of some of the most popular drinks at Starbucks:

20. What does the color of barista aprons mean?

You may have noticed that not all baristas are donning the green apron. Turns out, similar to the logo and the name, the color of their aprons has a secret meaning.

For example, the barista in the black apron are Coffee Masters, an honor earned by completely an internal training program and becoming certified for having expert coffee knowledge.

Any barista can wear the green apron. Red aprons are used during the holidays.

And, if you see the rare purple apron, this is reserved for barista champions. Only 26 baristas worldwide have won one! Fabio da Silva Neno, an assistant store manager from Portugal, was the recipient of the 2016 gold cup champion from the Starbucks Europe, Middle East and Africa Region championships.

Find out more about the apron colors and embroidery meanings here.

We hope you loved these hot facts about Starbucks. We’ll be back soon with more coffee resources for you.