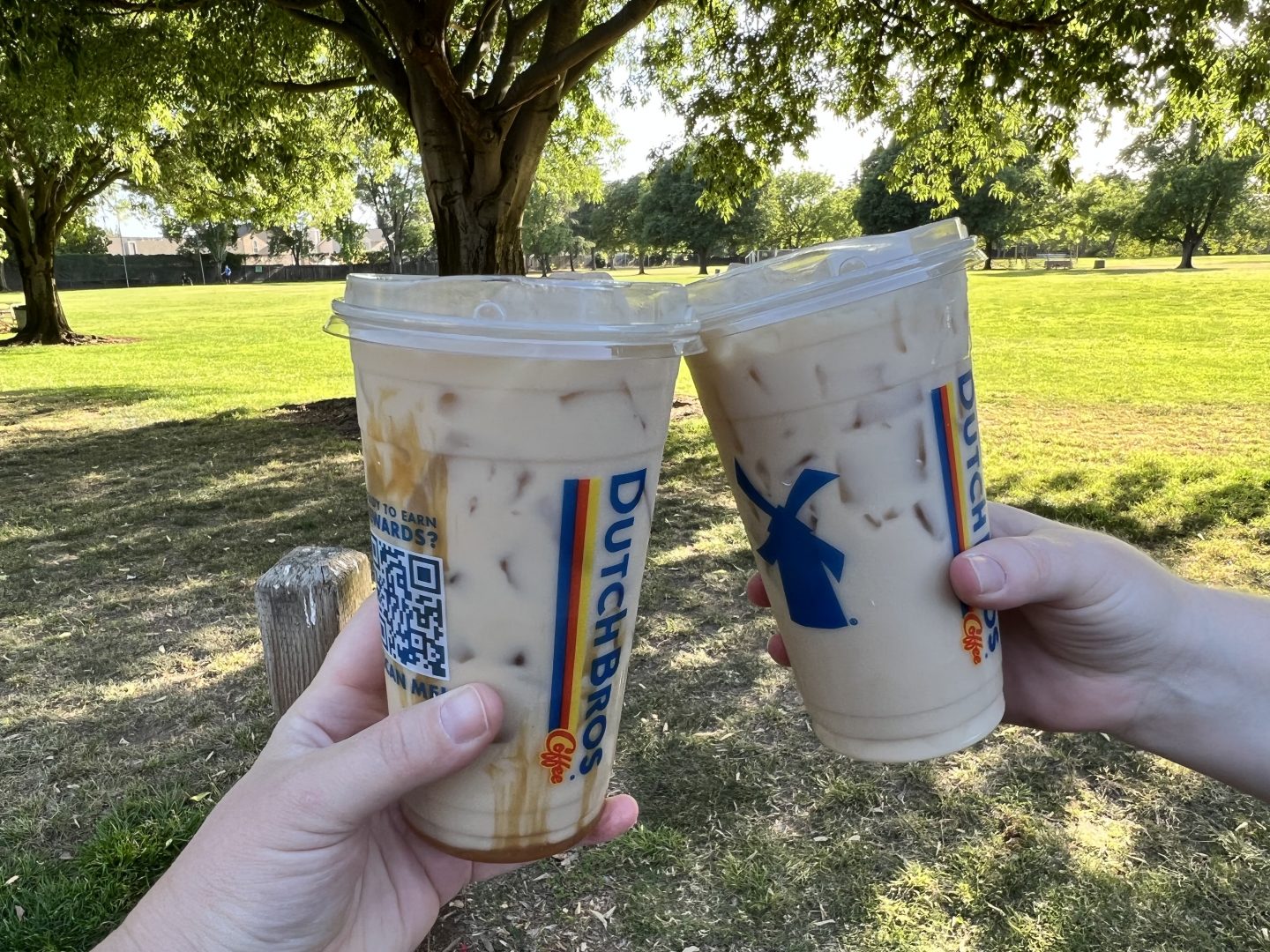 While I am cemented in my ritual of drinking coffee first thing in the morning, I do usually switch to tea in the late afternoon – chai tea, to be exact. I’m a huge fan of chai lattes, particularly with oat milk, and find the blend of spices to be really delicious.

I even like chai tea with a shot of espresso – a lovely concoction known as a dirty chai that you can order pretty much anywhere that makes a chai.

Some coffee houses treat their chai like an afterthought, a fine print option for the occasional tea drinker, but Dutch Bros has put a little more love into their chai offerings and I love them for that.

Dutch Bros has an extensive list of syrups available, all of which you can add to any chai drink base, but if you’re looking for something easy to order that you know is going to be delicious – check out one of these 5 Dutch Bros chai drinks. 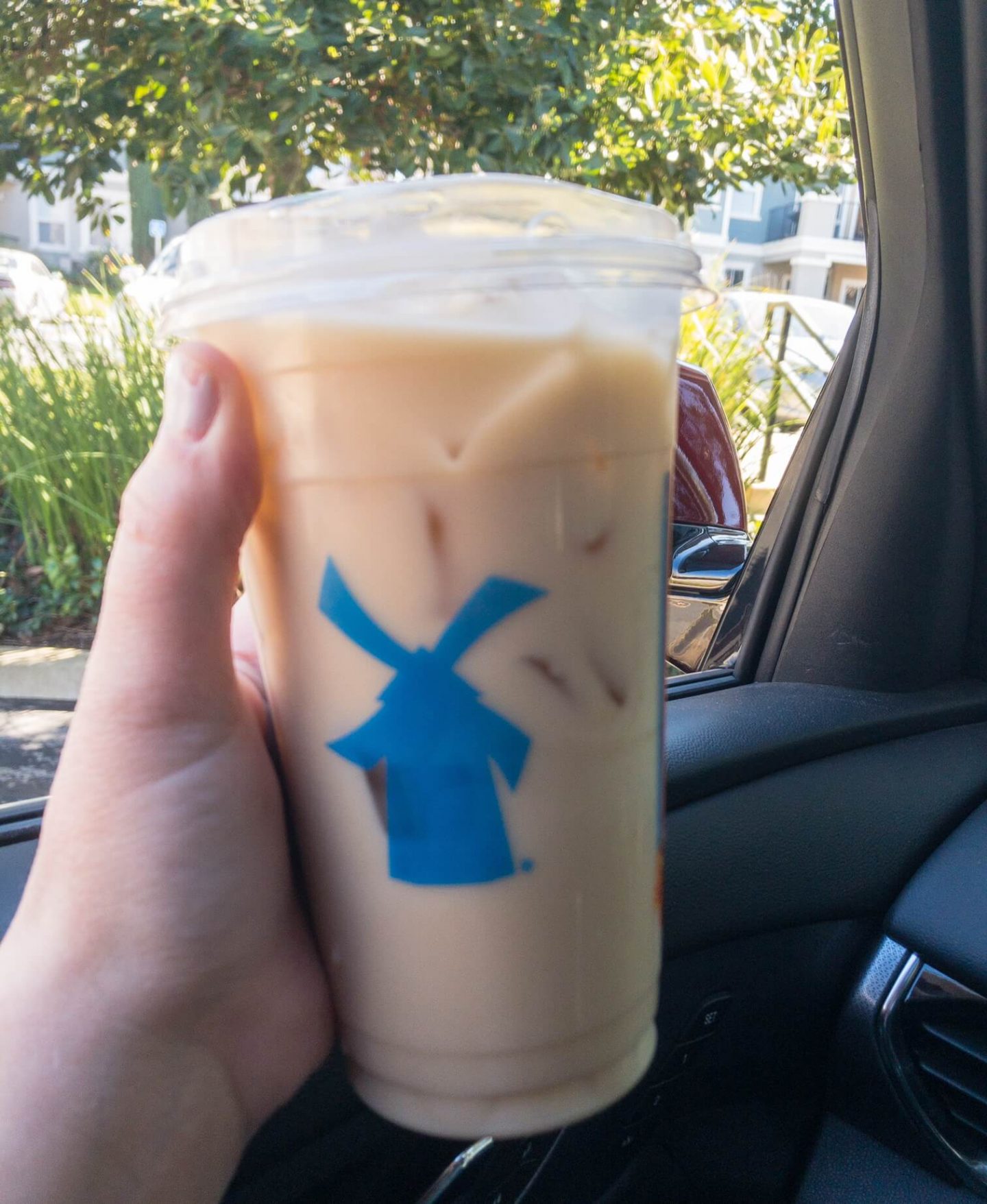 This is, by far, one of the best chai drinks I’ve ever had. Dutch Bros mixes their chai tea concentrate with white chocolate syrup (genius) and then a splash of their breve milk mixture. The combination is absolutely divine and easily addicting.

So, what’s actually IN the Christmas morning?

Well, like all chai drinks at Dutch Bros, the Christmas Morning is made with the Oregon Chai tea latte base – an instant powder mix or concentrate, half and half, and white chocolate syrup. The chai tea packets are dissolved with water while the half and half is added later to achieve the creaminess and lighter color. For the iced version, the concentrate is mixed with your milk of choice, the white chocolate syrup and can be topped with whip if you like.

I’m not sure why I never thought of a white chocolate chai, but now that I’ve had one, I can’t stop thinking about it, kind of like, Christmas morning 😉

If you don’t want to use their breve milk, you can order a White Chocolate Chai which is another one of their chai drinks made with any milk of your choice.

The Golden Eagle Breve is one of the best coffee drinks you can get anywhere. I love it so much, I dedicated an entire post to it. The Golden Eagle Chai should also take its place as one of the best chai drinks of all time. I think this one could easily go head-to-head with Christmas Morning Chai as the best chai drink offered at Dutch Bros (or anywhere). My cousin is not a chai fan and she absolutely loves this and regularly orders it when she wants something tea-based.

Just like the Golden Eagle coffee drink, this one has caramel and vanilla syrups, along with caramel drizzle, as well as the chai base. The caramel really plays well with the spices in chai. The pairing is remarkably delicious. If you’re looking for a new chai to try, make it this one.

This is a standard menu item at Dutch, so you shouldn’t have any issues ordering it. 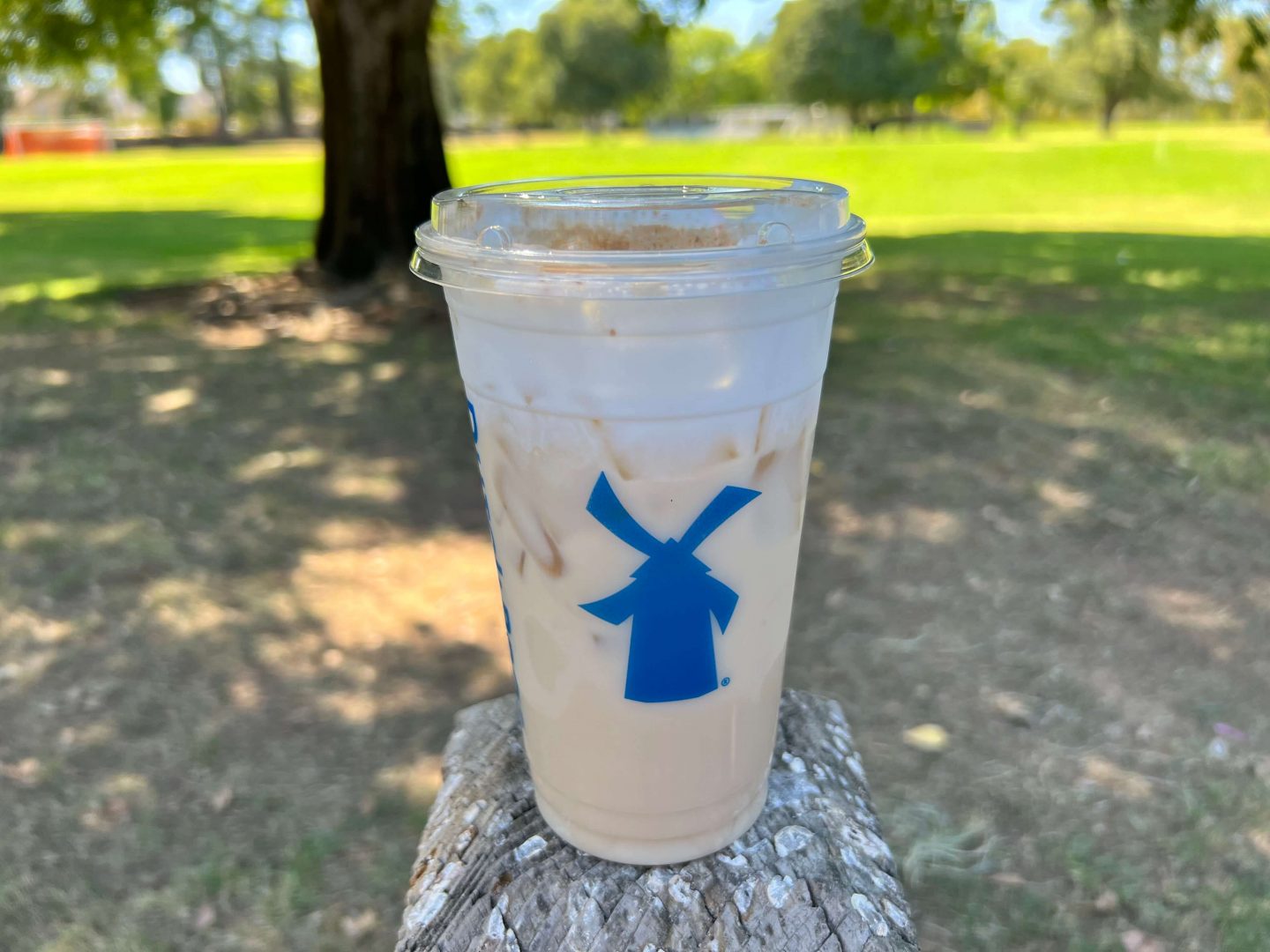 If you’re new to the dirty chai, it’s the base of a chai latte with a shot or two of espresso. Dutch took this up a notch and crafted the Sweater Weather Chai, which has been released for fall, but you can order it anytime.

This delightful concoction has the Oregon Chai, plus white chocolate sauce, white coffee shots, soft top and then cinnamon and nutmeg sprinkles.

The dirty chai at Dutch has a really nice blend of spices, milk and coffee. The taste of both the coffee and chai are muted by putting them together, but it has a bit more of a kick than their other chai drinks.

If you always feel the chai tea taste is too strong for you, you will probably love the way the shot of coffee tones it down a little. We have noticed that each coffeehouse has a different spin on the chai spices, with Peet’s Coffee having the spiciest and Starbucks using a chai with more cinnamon. We actually compared dirty chais at all three places in this post if you want to read more. 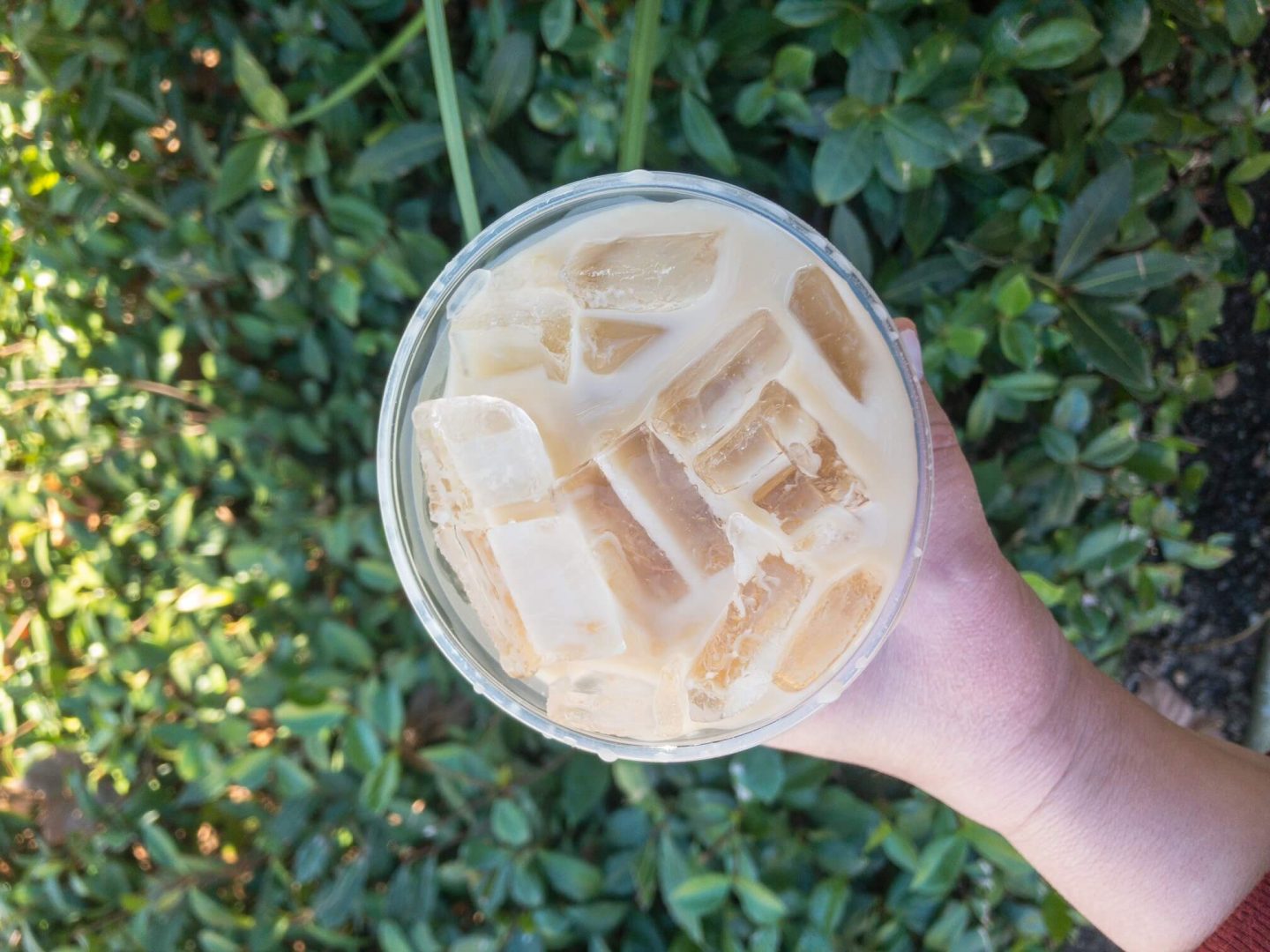 I never really thought about adding syrups to my chai lattes, but vanilla actually makes a really great match with the spices. If you feel like some of these other drinks sound like too much for you, this might be the right choice. The vanilla adds a soft sweetness to the chai blend, which tones down the chai just a little, but the chai still shines through. And, because there are less syrups, you’ll also have a slightly lower carb/sugar content from less added syrups.

Dutch Bros also has the most extensive list of sugar-free syrups I’ve ever seen, so you can swap vanilla out for sugar-free vanilla (or swap out any of these chai drinks for sugar-free syrups). Just know that the concentrate is pre-made and cannot be adjusted, so you will still be getting sugar in the mix. 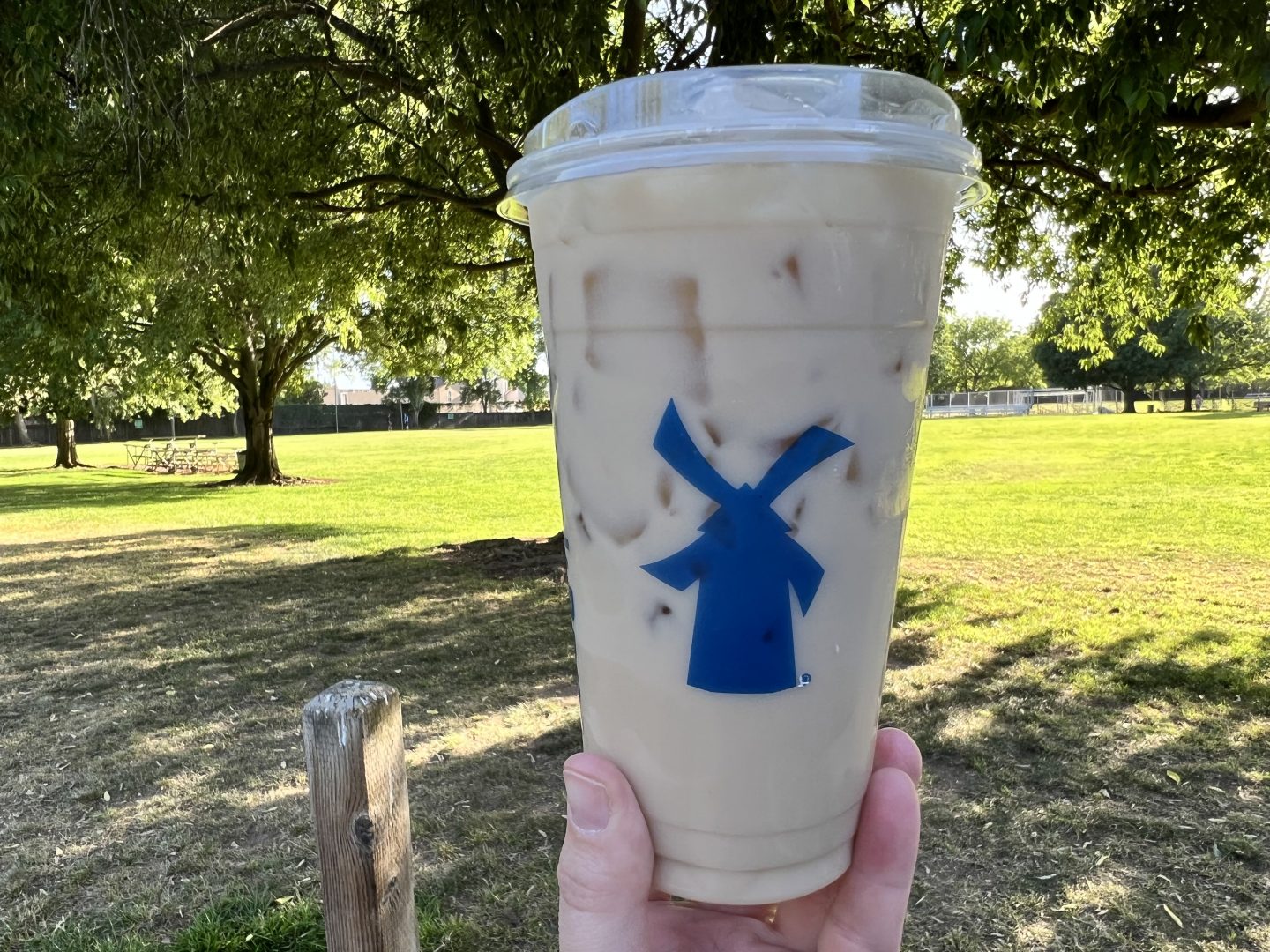 This one really surprised me at first. I didn’t know what to expect from the flavors, but I really liked it. The White Zombie Chai has a similar base to the Christmas Morning, with chai and white chocolate syrup, but then it also has vanilla syrup. It’s really sweet and delicious. You can’t taste the chai as much as you can with the Golden Eagle, so it’s perfect for you if you want a tea-based drink, but don’t love the spices of chai.

If you’ve wished for something in between the Christmas Morning and the Golden Eagle Chai – this is the one for you.

To order, just decide on the size, whether you’d like it hot, iced or blended, and which milk you’d like. For me, I order a medium, iced, oat milk White Zombie chai.

WHAT’S IN A CHAI LATTE? 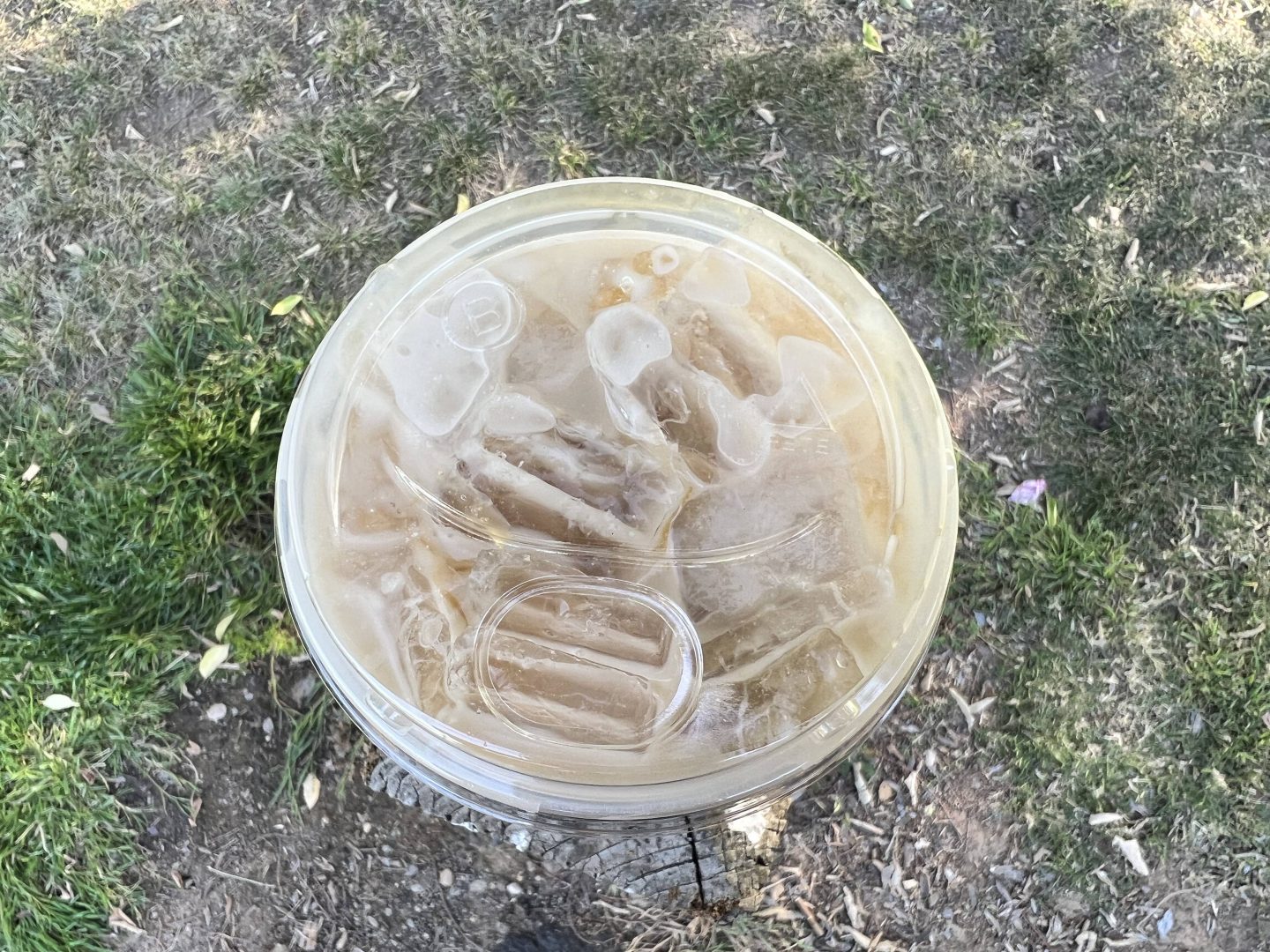 If you’re new to the chai business, let’s talk about the base of this delectable beverage.

Chai is a combination of black tea and delicious spices, like cardamom, cinnamon, cloves, ginger, and black pepper. Each chai recipe is slightly different, some are spicier than others, so depending on where you pick up your chai, it’ll have slightly different flavors. I find the Starbucks chai tea latte to be a really smooth, cinnamony flavor, while the Peet’s chai is a bit more of a kick in the pants and spicy. Dutch Bros uses the Oregon Chai brand in their chai tea drinks.

If you love the DB chai lattes or dirty chais, you can recreate them at home using the same chai concentrate that they use. Dutch Bros reportedly uses this chai concentrate as the base for their chai drinks. But, to mimic the taste of this drink, you’d also need the syrups, too.

How much caffeine is in a Dutch Bros Chai?

The exact caffeine content depends on how much of the chai concentrate is being used. One estimate said that a 16oz chai will have around 56mg of caffeine. This sounds about right, since 4oz of the black tea mix will have 40mg of caffeine.

Either way, a chai is going to have less caffeine than a coffee drink, so it’s a great alternative if you’re sensitive to caffeine or need to slow down your intake in the afternoon so you can sleep.

HOW TO CUSTOMIZE YOUR Dutch Bros Chai:

Listen, we all celebrate in our own ways, so you can make your chai latte your own with a few different swaps:

Have some fun with it and find your own perfect chai drink.

I am a big-time DB aficionado, but it hasn’t always been that way. It took me awhile to find my DB zone and I share it all with you on the blog. Check out these posts for more tips:

Chai drinks are some of my favorites and Dutch Bros has a great lineup of options. Have you tried any of these drinks? Let us know your favorite chai drinks!