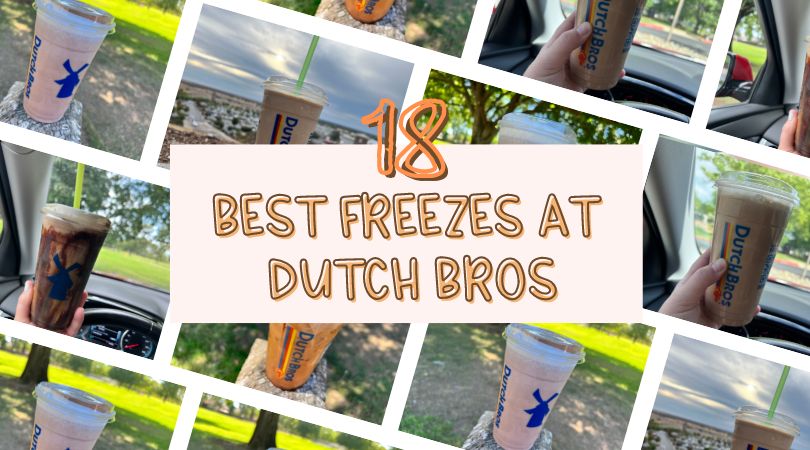 The Freeze is often confused with the Frost, but there’s a key difference that coffee lovers need to know: the Freeze is caffeinated and the Frost is not. The Frost is, essentially, a flavored milkshake, which makes it a great non-caffeinated choice or drink for kids.

Like a frappuccino, the Freeze is a caffeinated, coffee based drink that is blended with flavors to create a delicious, frothy coffee beverage.

Many of the popular Dutch Bros drinks can be turned into a Freeze for a slightly different flavor profile, such as the Golden Eagle Freeze or Trifecta Freeze, by adding the same syrups to the Freeze base, but it’s a great way to get your favorite drink in frappuccino form.

6 Facts About The Dutch Bros Freeze:

Before we go into the list of the best Dutch Bros Freeze drinks you’ve got to add to your list, let’s cover a few basics about the Freeze, so you know what your customization options are – and aren’t. You do have less options with the Freeze, because of the pre-made base.

1. The Dutch Bros Freeze has dairy:

You cannot order it dairy-free, because whole milk is in the pre-made base.

3. The Dutch Bros Freeze cannot be made sugar-free or keto.

You can ask for all sugar-free syrups to be added, but there is sugar in the base, so there is no way to get a Freeze completely sugar-free.

4. You can still add toppings:

Options include toppings like soft top, whip, drizzle and toppings.

5. You can add extra shots of espresso to the Freeze to increase the added caffeine content. 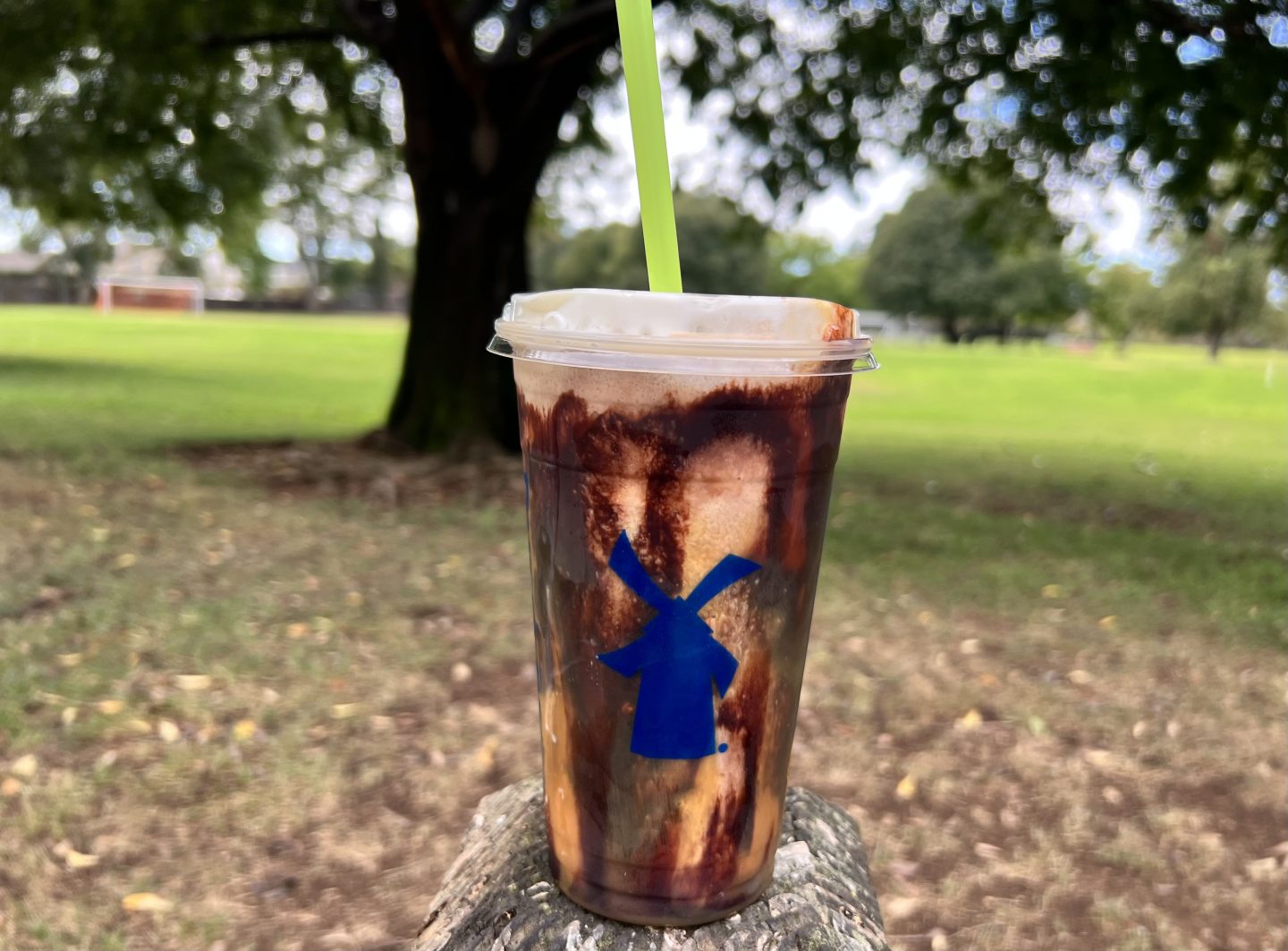 This is a decadent drink that is definitely dessert in a cup. It’s very tasty, though.

Made with the blended Freeze coffee base, plus caramel and chocolate sauce drizzle around the cup and on top of the whipped cream! 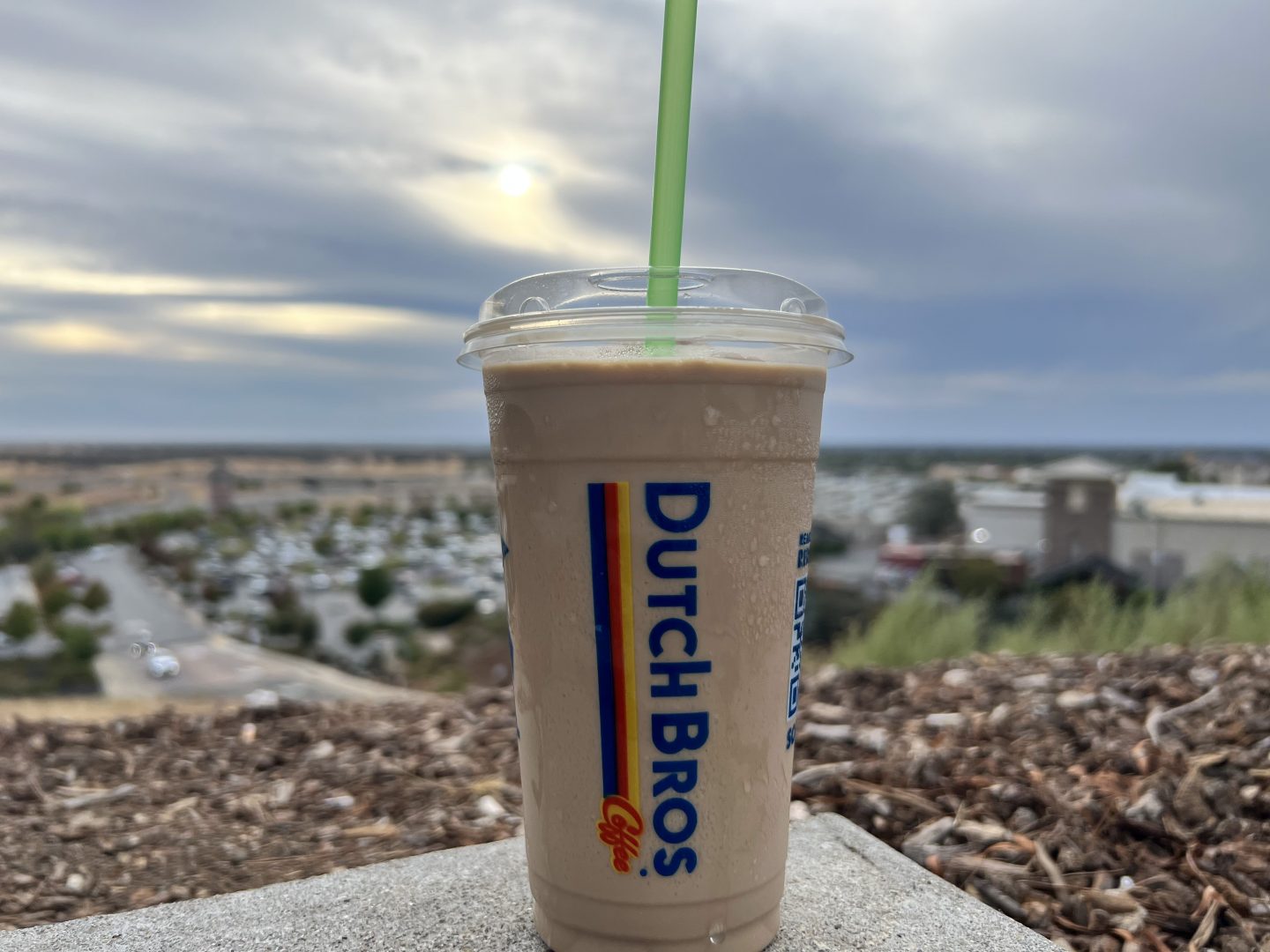 This is the drink of choice for the tallest guy in my house. He loves this one. Three flavors combine into the blended coffee base: caramel, white chocolate, and dark chocolate. It’s very good and sweet enough where you won’t miss the soft top or whip. 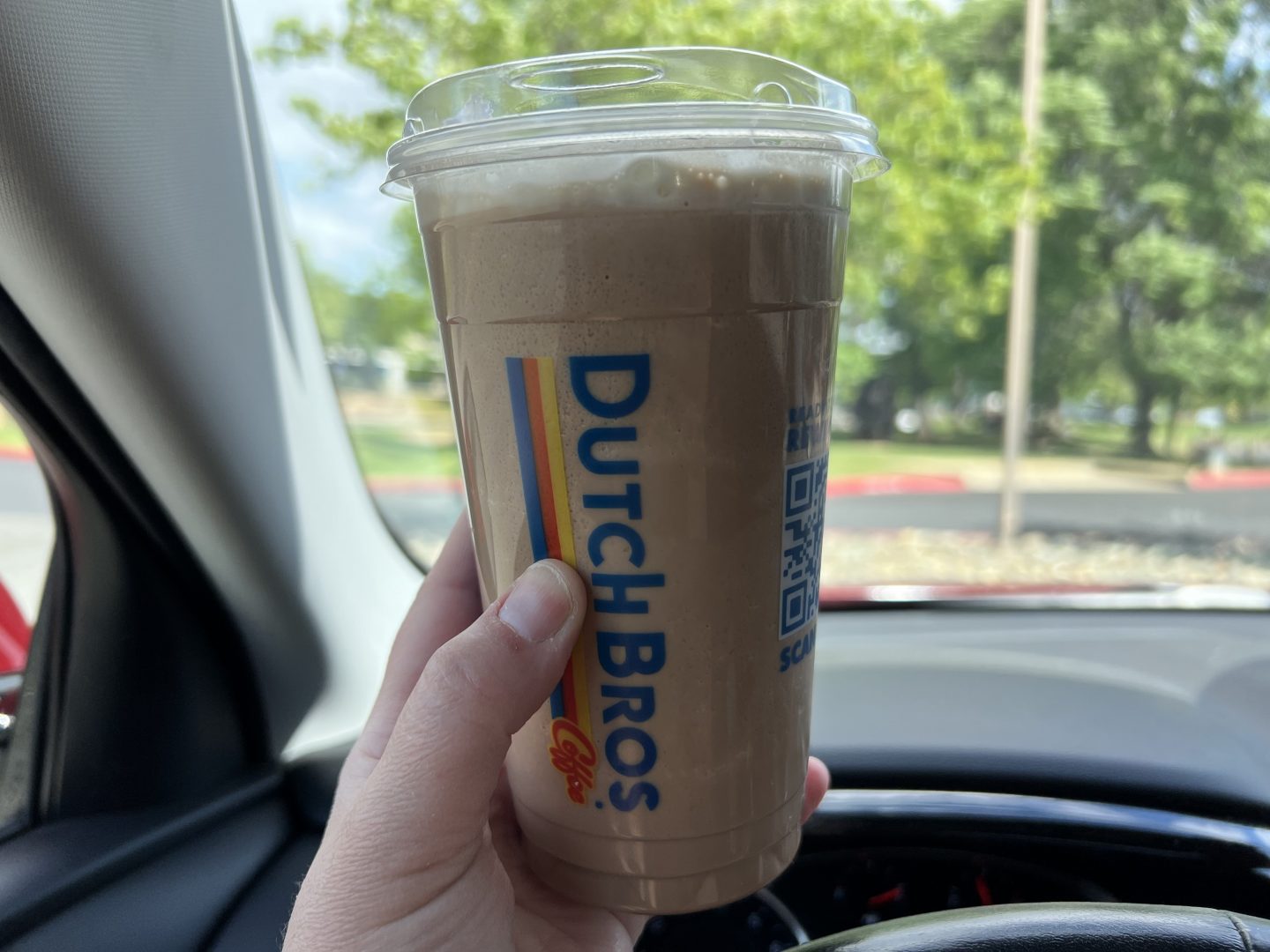 I asked for a recommendation one day and they recommended the secret menu drink: Snickers! I loved it, but I also think Snickers is one of the best tasting candy bars ever (who remembers their commercials when we were kids? They made you want a Snickers so bad!).

The coffee base is blended with caramel, chocolate, and hazelnut syrups. If ordered hot or iced, they use their chocolate milk instead of regular milk and it’s next level, too. Read all about this secret menu drink in this post. 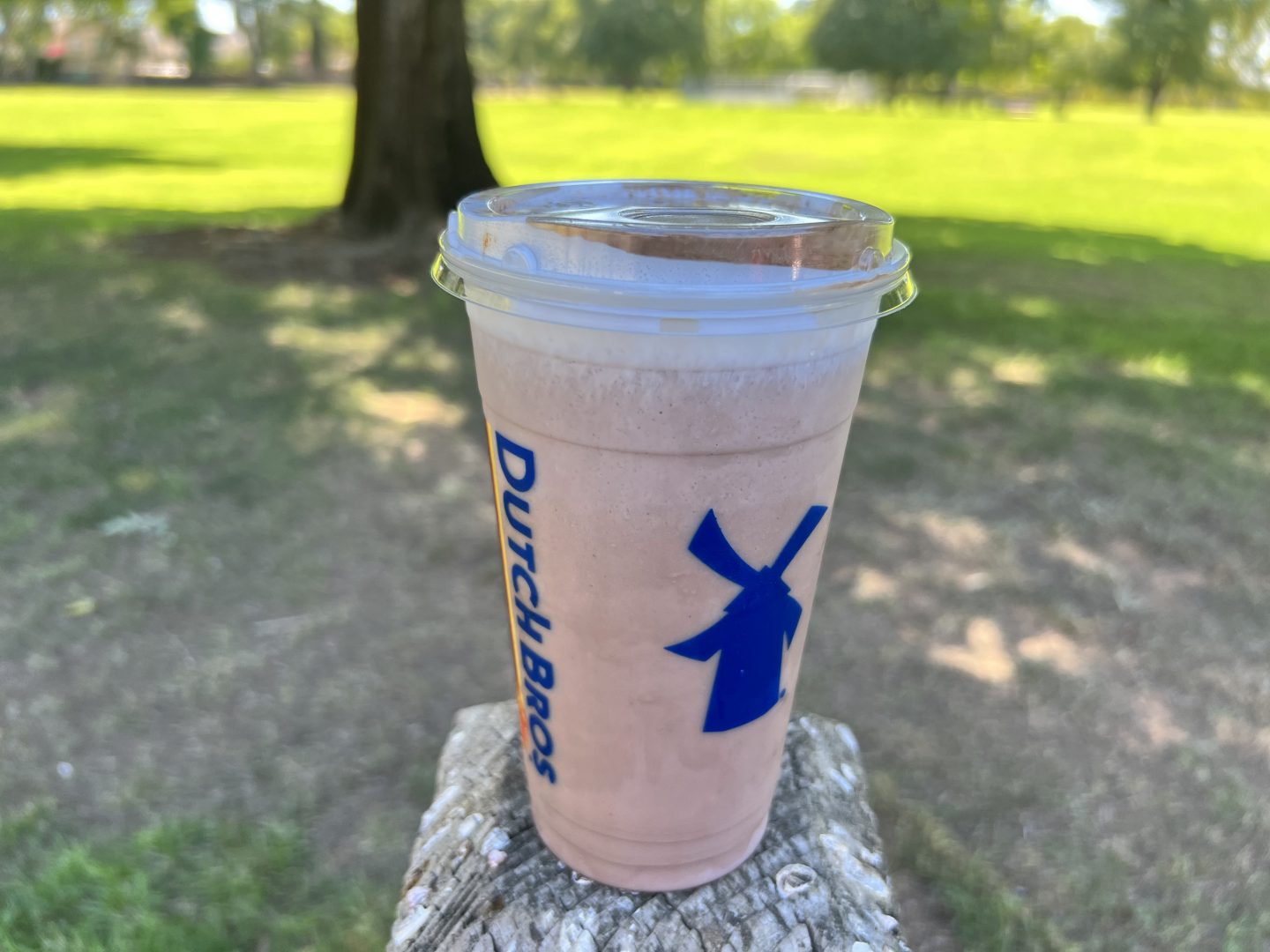 I’m a huge fan of cinnamon based drinks everywhere I go. I’ve even recreated my favorite cinnamon simple syrup to make drinks with at home. So, the Snickerdoodle was high on my “try” list and I did not regret this choice one bit. 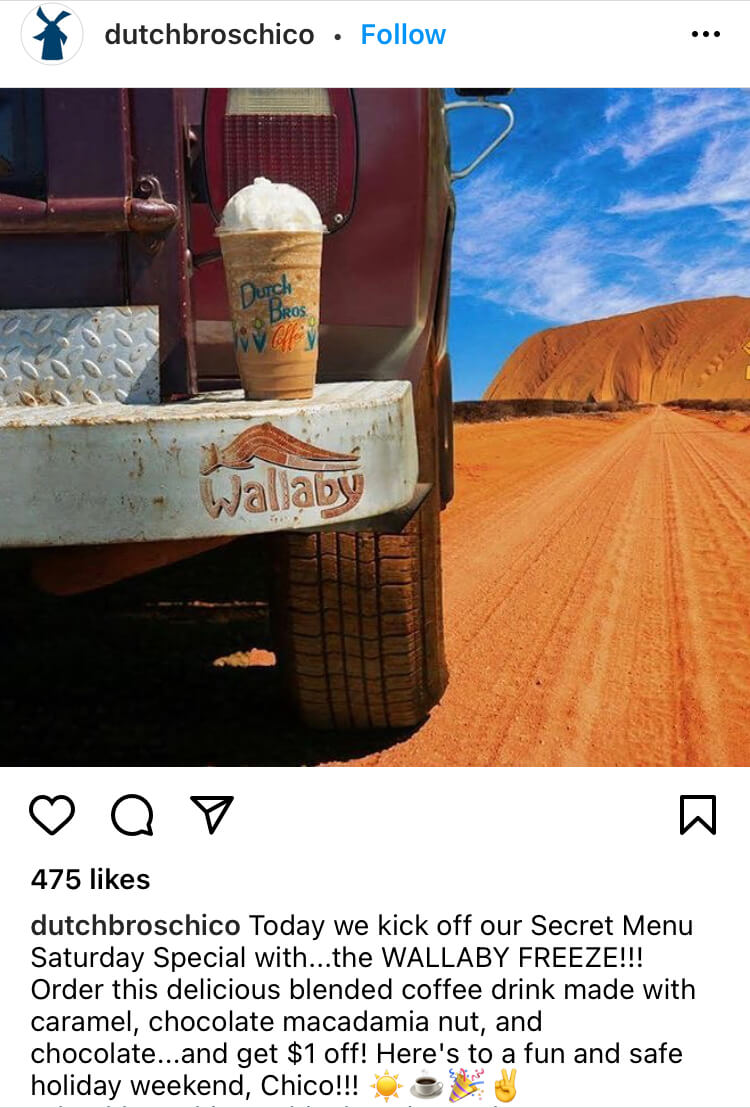 This one is another delicious one. I’m realizing that I like the drinks with combinations of their caramel, chocolate macadamia nut and chocolate syrups. There’s a pattern here, people. LOL

I loooove the White Zombie Chai and they use the same combo of flavors in the White Zombie Freeze as well. Can you go wrong with white chocolate syrup, vanilla syrup and coffee blended together? The answer is no, people, you cannot.

The Caramelizer drink has a cult following. I was hanging out with my niece recently, who I never get to see and we drove through a Dutch Bros (of course). She ordered a Caramelizer! I wasn’t too surprised, though, it’s one of their most popular drinks and it comes iced, hot, or blended as a Freeze. The flavors are that of a caramel mocha, so caramel sauce and chocolate. Yum.

Mint chocolate lovers, rejoice! You can get a chocolate and mint flavored Freeze. It tasted like a blended Girl Scout cookie. You know the one I’m talking about. 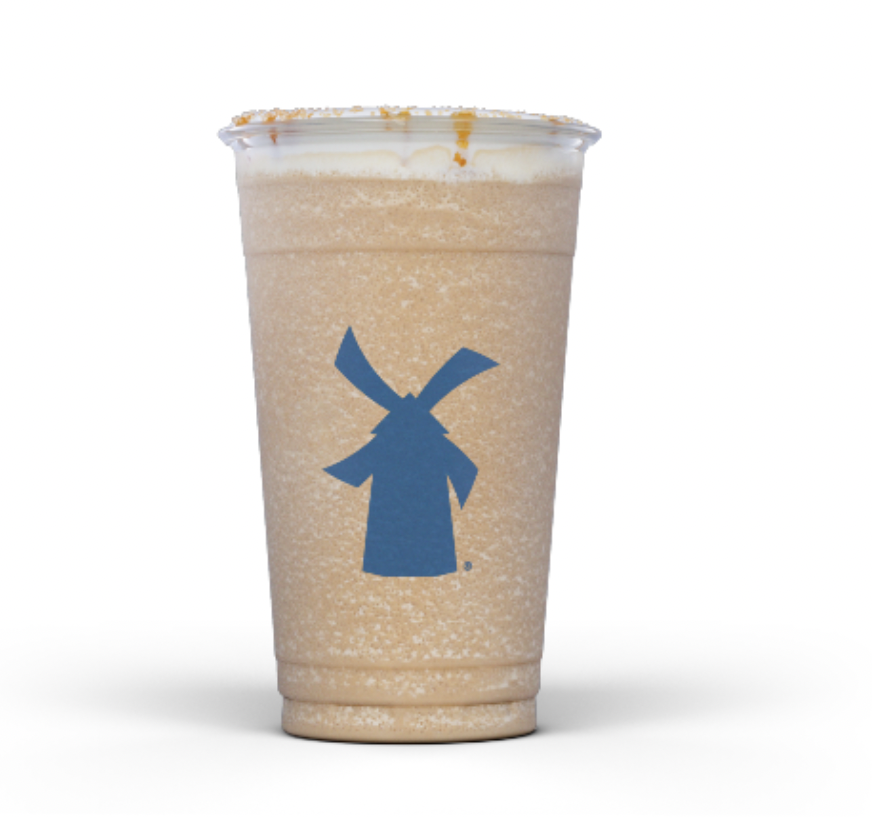 This is on the fall drink menu and it’s good, people. It’s real good. I’m not a fan of Pumpkin Spice Lattes (I know, I know), but I do like things with pumpkin flavors. This one has salted caramel and pumpkin, which gives it a bit of a pumpkin pie taste, but topped with raw sugar sprinkles and Dutch Bros’ signature Soft Top

For more drinks on the Dutch Bros fall menu, head to this post.

When I was a kid, I hated anything with coconut, so German Chocolate cake was out. As I’ve gotten older, I’ve gained an appreciation for coconut – especially when it involves chocolate. I recently went to Carmel and there were this melt in your mouth chocolate macaroons the size of my palm (read about it here). Easily the most delicious cookie I’ve ever had in my life. Anyway, my point is, this drink tastes like the drink version of that cookie. It’s good, friends.

There are two different cookie flavored Freeze drinks and this is one of them. Fans of the Cookie Dough Cold Brew are going to love this one, since it uses the same chocolate chip cookie dough syrup (one of my favorites). Don’t confuse this with the Cookie Freeze, which has white chocolate and chocolate macadamia nut syrups.

Is Mexican chocolate your jam? Love cinnamon and coffee? Consider the Molten Lava Freeze, which has cinnamon, dark chocolate and the coffee base.

Cinnamon and coffee is one of my favorite pairings. If you haven’t tried it – give it a chance!

This popular secret menu drink is a dark chocolate and banana mocha with a generous swirl of whipped cream on top. It tastes like chocolate banana bread or a chocolate covered banana. It’s not for everyone, but fans of the drink are die hard loyalists.

Do you love Irish cream? Dutch Bros is the only coffee house I’ve seen with Irish cream flavored drinks and people love them. The Nutty Irishman has Irish cream AND hazelnut, plus the coffee base, for a truly unique combo that you’re either going to become obsessed with or feel is not your top pick.

My son’s favorite drink is the Ninja frost, which is vanilla and mint. He prefers this even to the Grasshopper, which is the more traditional chocolate and mint combo. The Ninja Freeze is the same flavor profile, but with the coffee base, so you’ll have a minty vanilla coffee flavor. It reminds me of a blended version of the Philz Mint Mojito. So good!

*****
There are a lot more flavors – plus you can create your own using any of the syrup combos that they have. So, if you have a favorite coffee drink, ask them to turn that into a Freeze and they can do it.

I hope this inspires you to get to DB and order a new Freeze! Tag us @whatthefrothblog on Instagram so we can see what you picked!